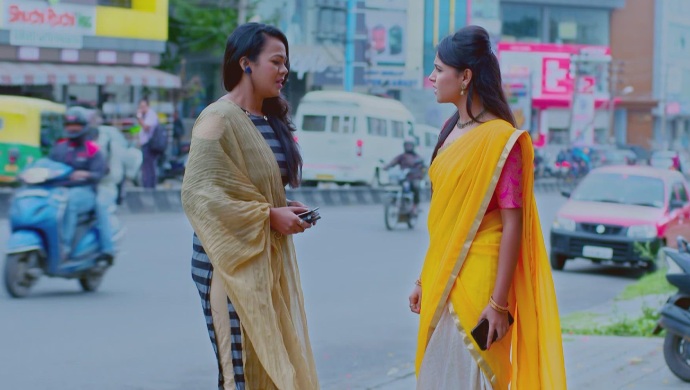 In the previous episode of Gattimela, Vicky is sad when Manjunath gives him an ultimatum and goes into mute-mode for the rest of the day. Amulya and Adithi are soon stunned to learn that Aarthi supports her father’s decision, whatever it may be. Ammu and Adithi then think of a plan to overcome this situation while Vedanth learns that Vicky is missing from home. A short while later he finds out that Vicky is at Srivatsa’s bachelor party. After giving Sarthak, Srivatsa and Vicky a good lecture about the disadvantages of marriage, Vedanth takes his Vicky home.

On tonight’s episode, Aarthi scolds Amulya and Adithi for loitering around the house when there is so much of work to do. After she gives them the warning to run an errand quickly and leaves, both Aarthi and Adithi sit down in exasperation and wonder what is up with their oldest sister. Elsewhere at the Vashishta mansion, Suhasini waits in worry for her younger son while wondering about whether Vicky will be able to convince Vedanth to get married.

When her sons arrive at home, she tries to question Vicky, who is absolutely not interested to continue the discussion. Informing his mother and brother about the ultimatum Manjunath gave, Vikranth quietly goes to his room. After brainstorming with Adithi for a while, Amulya comes up with a plan. She calls Vedanth, who is busy speaking to a client, and doesn’t give up till he picks up the phone, annoyed. She directly comes to the point and tells him to marry her.

Amulya is surprised when Vedanth takes a long time but rebukes her for her idea. She then informs him that she was only giving a reference that since he doesn’t want to get married to her, all he has to do is find someone who suits his personality. Heaving a sigh of relief, Vedanth scolds her for giving him the wrong idea and cuts the call. The next day, Amulya enters Vedanth’s cabin and feels awkward to see him even more upset. He, on the other hand, is reminded of her technical ‘proposal’ and loses his calm with each passing second.

During their conversation, Amulya gets an alarming call from Pavitra, who is crying inconsolably. Upon meeting her, Amulya learns that because of Vedanth’s lecture about the disadvantages of marriage, Srivatsa has back out and has left the city. At this time, Sarthak barges into Vedanth’s cabin to inform him about the same. While Amulya asks Pavitra to exact vengeance for running away on such a silly reason, Vicky gets into trouble with Aarthi because of Sarika’s extra-friendliness.

Will Aarthi forgive Vicky? How will Amulya bring justice to Pavi? To know this you will have to stay tuned!

Watch The Latest Episodes Of Your Favourite Show Naagini, Streaming For Free Here On The ZEE5 Platform