On the next episode, without any discussion, the police arrive at the park and inform Vedanth that he is under arrest. Amulya runs after Vedanth! 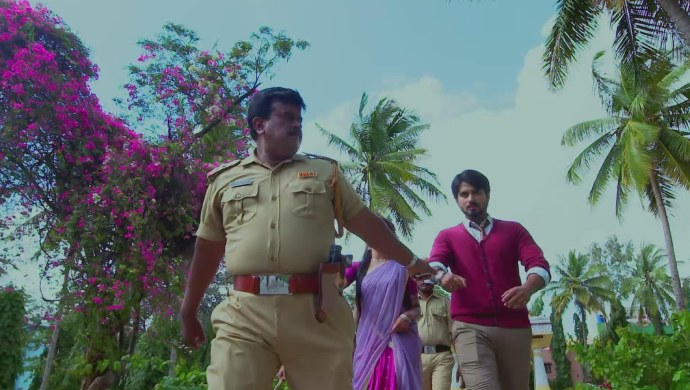 In the previous episode of Gattimela, Amulya manages to save herself in the nick of time from getting caught by Vedanth as the stalker. Meanwhile, the money-lenders from whom Manjunath borrowed money from, barge into Pari’s house and demand his whereabouts. Soon, the ladies manage to ask the goons to leave but only after they take Aarthi’s valuables and Ammu’s Rani. Elsewhere at the park, Vedanth spots a lady wearing a red dupatta (the same costume he had asked his stalker to wear while meeting him) and furiously goes to the lady and starts scolding her. When her boyfriend arrives, Amulya somehow manages to convince them that her boss is slightly mental. In the end, Vedanth tells her that if he finds the girl who started all of this he will kill her.

In the next episode, as Vedanth and Amulya are talking in the park the police arrive there. When the two of them probe into the matter the head inspector tells them that Vedanth Vashishta is to be placed under arrest. They then take Vedanth away from the park as Amulya runs after them screaming that her boss didn’t do anything.

Who is behind this arrest? What lies ahead for Vedanth and his reputation now? Stay tuned tomorrow’s episode to find out.

Sakkath maja and entertainment on ZEE5 is just a click away.

Sudha Narasimharaju Aka Parimala Of Gattimela: My Father Advised Me To Be A…