On tonight's episode, Amulya pretends to romance with Vedanth and the two get carried away but not before the cops arrive there and arrest the latter! 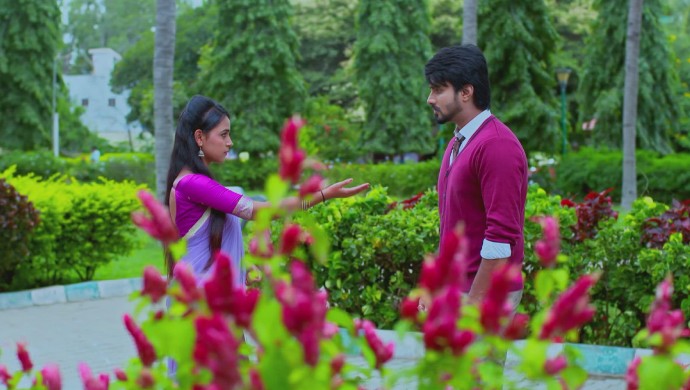 In the previous episode of Gattimela, Amulya saves herself in time from Vedanth assuming that she is the stalker. Meanwhile, the goons from whom Manjunath took the loan, barge into Pari’s house and demand his presence. Soon, the ladies manage to convince the goons to leave but not before they take Aarthi’s valuables and Ammu’s bike as collateral. Elsewhere at the park, Vedanth sees a woman wearing red dupatta (the same outfit he asked his stalker to wear to meet him) and marches up to the lady only to scold her. After her boyfriend arrives, Amulya manages to convince them that Vedanth is slightly mental.

On tonight’s episode, when Amulya asks Vedanth what he would do if he found the girl, he tightly grabs hold of her hand and informs her that he will kill her. When he tries to leave the park, somehow Amulya makes him stay and give it some time. At the Manjunath house, as Pari, Adithi and Aarthi sadly sit in their hall wondering what to do, Vicky arrives there, much to their surprise.

Back at the park, Vedanth asks Ammu why she thinks they should still wait after the stalker never showed up. To this, Amulya snaps back at him saying that if he is walking around like a rogue looks murderously for someone, which girl would want to come close to him. After telling her that she herself is close to him after adds a taunt causing the romantic moment they were about to have to be ruined.

A few moments later, Vedanth accepts defeat and asks her what to do to find the stalker. Amulya starts giving lessons to Vedanth, at first he rejects such silly romantic ideas. However, with Amulya’s persistence, he slowly starts listening to what she has to say. Much to his surprise, Amulya then starts praising him and talking extremely romantically. She starts giving examples from their own life of how they were destined to be together after constantly crossing paths.

When she tells him that they still haven’t spoken to each other romantically even once till now, Vedanth can’t help but stare at Amulya. She continues by saying that she thanks the times they fought without which she would have never understood what is the real vibe between them under the hatred. At home, Vicky informs Pari and her daughters how when he met her previously he knew something was wrong.

Further, he reveals to them how when he returned from work to ask what’s going on, he spotted the goons leaving from the house. Soon, Pari is emotional and grateful to Vicky when she finds out that he has cleared the entire loan amount and brought their jewellery back. At the park, Amulya continues telling Vedanth how she feels empty when he isn’t around. All this while, Vedanth stares at her dumbfounded.

After completing her piece when she tells him sweetly that she wants to be with all her life. She ends with a question of whether he would like to be with her all their life? Just as she puts out her hand and he is about to put his hand on her to complete the promise, a police inspector with his team arrive there. He then tells Vedanth that he is under arrest.

Not convinced with what he just heard, Vedanth probes into the matter asking about the reason for such a sudden approach. Back at home, Vicky tells Pari that if the situation was reversed Aarthi too would have done something or the other to help out. Calling himself the son of their house, he continues to tell Pari that it was his hard-earned money that he had saved up after working at Vedanth’s office.

Pari thanks Vicky and tells him that she doesn’t have anything to give in return except a good hot cup of coffee. As he and Aarthi stand to look into each other’s eyes, he hears Manjunath calling out to him from behind. Without another word, Manjunath walks over to him and hugs him tightly. At Sarika’s house, Padma and Ashwath are shocked when Aadya comes out crying and Sarthak informs them about Vedanth’s arrest.

At the park, after Amulya protests and asks the cops to rethink their decision, the inspector informs them that a sexual harassment case has been filed on Vedanth’s name. In the end, Vedanth is taken away by the cops.

Who filed this complaint? Does Sarika have anything to do with this? Stay tuned to Monday’s episode to find out.

For entertainment on the OTT platform, ZEE5, click here.

If You Haven’t Seen The Rebel Star’s Movie Doddmane Hudga,…

Have You Watched The Latest ZEE5 Digital Premiere Seetharama Kalyana Yet? If Your Answer Is No, You Ought Bookmark This Film For The Weekend Right Away, Only On Your ZEE5

Inspired By Deepika Das's Vacation To Coorg, Your Itinerary For A Two-Day Getaway Is Ready