In this episode of Gattimela, Vedanth asks Amulya to go out with him, causing her to be shocked. Elsewhere, Vicky comes back in the good books of Pari 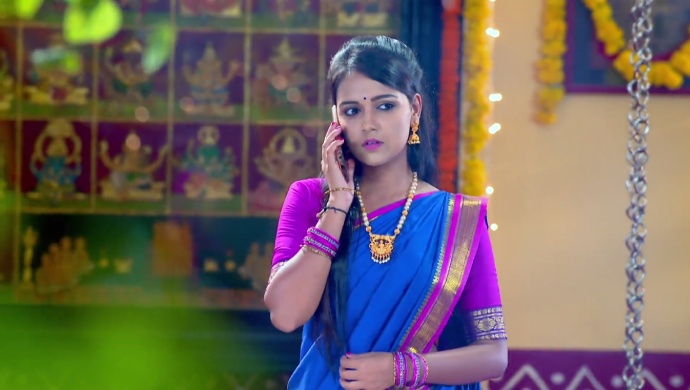 On the previous episode of Gattimela, Sharada catches Vedanth following her and misleads him before disappearing out of his sight. At the Manjunath house, the Chapra Pooja begins after Padma and Sarika’s arrival. Just as the pooja is over, Vedanth and Vicky reach the Manjunath house, each with their own reason to meet Amulya and Aarthi. Sharada reaches the Maduve Mane late, just misses seeing Vedanth. He and Vicky, who devise a plan to enter the house as Banana vendors without being seen, are soon in trouble. In the end, Vicky crosses paths with Sarika but escapes being seen. She, however, finds the voice of the Banana vendor familiar.

On tonight’s episode of Gattimela, Vicky somehow escapes Sarika’s view and goes to give Aarthi a pleasant surprise. However, Adithi and Aarthi are more shocked to see him. Meanwhile, Vedanth escapes getting caught by Parimala and goes from the back entrance to keep the Bananas in the kitchen. Sharada, who is walking around the house finds Parimala and apologises for the delay. She is then taken to meet Aarthi. In the kitchen, Vedanth lies to the other women around in the kitchen and sends them to get free-sarees. All this he does to speak to Amulya alone. She, on the other hand, is puzzled to hear that they are giving away free sarees near her house. When she sees Vedanth in front of her, she screams out causing him to forcibly put his hands on her mouth. Then, they have a moment.

Aadya, who comes running to see why Amulya shouted is surprised to see Vedanth and her standing close to each other and his hand on her mouth. Her doubts about them are then confirmed and she goes to tell this to Sarthak. Elsewhere, while Sarika is in doubt about the man she heard a while back, Parimala comes along with Sharada and they all go to see Aarthi. Adithi, who informs Vicky of the danger they are in of being seen passes on her fear to Aarthi too. However, Vicky has another plan in mind. Just as Parimala reaches the door to the room they are in, Vicky pretends to congratulate Aarthi on her big day and gives her the gift he got. While Sarika thinks this is the end of Vicky and Aarthi’s love story, Vedanth realises where his hand is and takes it off immediately before taunting Amulya about her pitch. They soon get into a quarrel and Vedanth asks her to accompany him outside.

She, however, takes this in a different light thinking that he has a crush on him. He clarifies his feelings and then asks her to go with him to meet someone important. Amulya dismisses his requests is about to leave the kitchen when she sees something frightening and hugs Vedanth in fear, much to his dislike. She then tells him about a cockroach she saw, causing him to get as scared as her. Elsewhere, Parimala politely asks Vikranth about what he is doing in the Manjunath house. Using Aadya as an excuse Vikranth goes back into Parimala’s good books, as she thinks that she is a very caring brother. As he is exiting the room, he gives Sarika a ‘who’s the boss now?’ look and walks away cooly, much to her irritation. Aadya, who is out to find Sarthak, finally sees him with Manjunath and takes him away to give him the good news. Sarthak who learns of something going on between Amulya and Vedanth is puzzled with this news.

In the kitchen, Amulya makes fun of Vedanth for getting scared of a cockroach and vice versa. When he continues insisting that she go to the said place with him, she pretends to look for a cockroach to throw at him and he follows Amulya to stop her. In a quick chain of events, he corners her near where the flours are kept and trips. As a result, all the flour falls on both of them. Another argument soon breaks out about whose fault all this was. Finally, an irritated Vedanth reveals to Amulya that he has found out the real address of where Gautham’s wife lives.

Will Amulya agree to go with him? Does Vedanth really know the address? You’ll find out in the next episode.

Watch the latest episodes of Subbalakshmi Samsara, here on the ZEE5 Platform.

Watch The Sharan Hruday Special On Weekend With Ramesh Season 4, Streaming For Your Entertainment On The ZEE5 Platform

When Vedanth-Amulya, Manja-Anu Got Caught In A Romantic Moment, And We Were Like 'Awkward'