In the next episode of Gattimela, in Vedanth's urgency to meet Amulya, he lies to all the ladies in the kitchen to talk to her privately! Oooh... 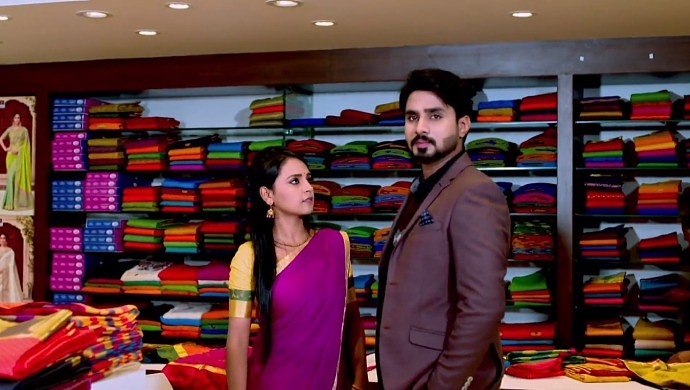 On the previous episode, Sharada realises that Vedanth is following him and misleads him to a dead end. At the Manjunath house, the Chapra Pooja begins in full swing after Padma and Sarika arrive there. Just as the pooja is done, Vedanth and Vicky arrive there, each with their own respective motive to meet Amulya and Aarthi. However, Sharada, who goes to Manjunath house, just misses spotting Vedanth and Vicky, who devise a plan to enter the house as Banana vendors without being seen. Later, Vicky, who crosses paths with Sarika, escapes her sight but she soon realises that the voice of the Banana vendor is familiar.

In the next episode of Gattimela, Vedanth talks to all the ladies in the kitchen and tricks them into going to some temple near the Manjunath house to get free sarees. While Amulya is wondering where the temple is near her house, she looks the other direction to find Vedanth. In disbelief, when she screams out loud, in a reflex, Vedanth puts his hand over her mouth to shut her up. The two then share an intimate moment subconsciously.

How will Amulya react to Vedanth’s sudden arrival? Stay tuned to the next episode to find out.

Catch your favourite Kannada movies on the ZEE5 platform here.

The Folk Song Round On The Hit Singing Show Of Karnataka, Sa Re Ga Ma Pa Li'l Champs Season 16 Can Be Watched On ZEE5 By Clicking Here