In this episode, Paramananda falsely accuses Amulya of picking a fight with Vedanth's mother on purpose and hitting. What is the truth? Find out here! 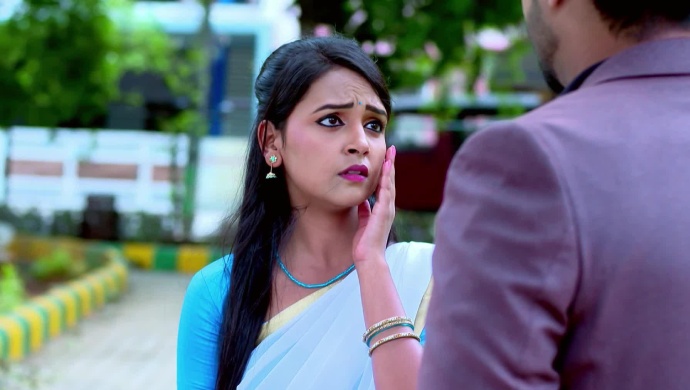 In the previous episode of Gattimela, Paramananda fails in gathering proof against Vicky and his lover, because Amulya, Anjali and Adithi mistake him for a goon and thrash him. Elsewhere, Sarika executes her plan to teach Aadya a lesson and is successful. Aadya falls to her stomach and screams in pain. Soon she is rushed to the hospital. While everyone is coping with the situation, Sarika calls up Suhasini and misleads her saying that the mishap is all Parimala’s fault. Suhasini, who believes her every word, storms into the hospital. After seeing Aadya’s condition, an irate Suhasini walks over to Parimala and slaps her hard across the face. Everyone, except Sarika, stands shell-shocked.

On tonight’s episode, everyone stands in disbelief when Suhasini blames Parimala for the mishap with Aadya. Just as Amulya rushes to her mother’s side to check if she is fine, Padma gasps at the blood coming out from Parimala’s ear. Amulya, who cannot handle the ultimate insult to her mother slaps Suhasini in return without even thinking. Again, a moment of shocked silence takes over the room. Amulya tries her best to calmly explain to Suhasini to at least listen to what exactly happened but the latter is in no mood. Aadya’s mother then sternly asks Padma to ask the ‘mongrels’ (Parimala and her family) to leave. She, however, shoots back a nasty question to Suhasini about who started this fight first, much to the latter’s astonishment.

Parimala then interrupts them and takes her family away, in order not to cause any more problems because of them. Once home, she tells her daughters not to tell Manjunath that any of this happened. Adithi retaliates but walks away in a huff. A puzzled Amulya follows her out and asks Adithi if she is angry with her. To this, Adithi replies that in the situation they are in with Vicky and Aarthi, what she did will set Vedanth off. She then warns Amulya to be careful because now Vedanth will come looking for revenge. At the hospital, Vedanth, who goes to check up on Aadya, learns of a commotion that happened earlier. When he asks Suhasini, Paramananda blames it all on Amulya and tells Vedanth that even though his sister was just talking, that bajaari is the one who raised her hands first.

Enraged, Vedanth hurries out of the hospital while Vicky follows his older brother to keep an eye on him. At the Manjunath house, the girls and Parimala aren’t able to keep the secret long from him. Amulya, who gets scared that her father will hit her for raising hands on an elder woman, is met with teary-eyes and an emotional embrace. Manjunath also tells her that she has fulfilled his wish of having a son. Elsewhere, despite many attempts to calm Vedanth down, he calls up Amulya and asks her to meet him in the place they always meet. Adithi decides to accompany her and follows her to the park. In the end, with a fit of raging anger inside, Vedanth storms across the park and walks over to Amulya only to give her a tight slap across the face.

Will Amulya apologise? What will Vedanth do next? Stay tuned to the next episode to find out.

If You Are A Fan Of Kamali, Watch The Latest Episodes Of The Zee Kannada Show, Here On The ZEE5 Platform