Gattimela 19 September 2019 Preview: Vedanth THREATENS To Kill Amulya For What She Did

On tomorrow's episode, while goons reach the Manjunath house and threaten Pari, Adithi and Aarthi, Vedanth promises to kill Amulya for her actions! 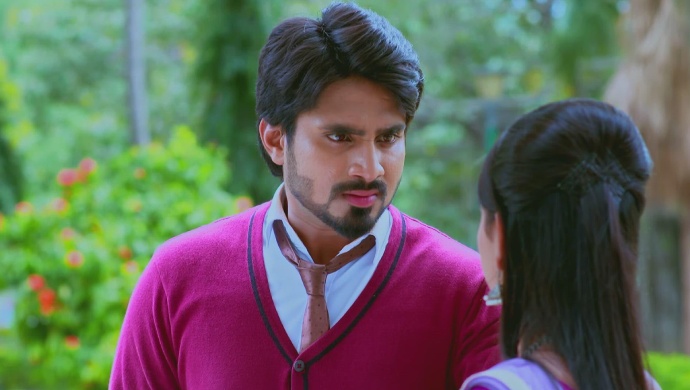 In the previous episode of Gattimela, Kantha hatches a counter plan to catch Vedanth’s stalker and sends a message to the number asking for a meet-up. Amulya, who assumes that it is Vedanth on the phone, plays along and is very surprised of having converted the latter so easily. Elsewhere, Vicky goes home to celebrate the six-month anniversary mark of the day when he first laid eyes on Aarthi. While Sarika tries to stop Amulya from being successful in her plan, Vedanth is furious in the end when he calls the stalker and Amulya’s phone rings instead.

On the next episode, just as Adithi is discussing her mother with Aarthi, there are loud knocks on their door. Scared, Parimala comes out and goes to the door with her daughters only to find the same goons who threatened her before standing at their door. They soon come in and start shouting out for Manjunath extremely loudly. Elsewhere, Vedanth grabs hold of Amulya’s hand aggressively after feeling relieved that the culprit has been caught. Angrily, he then tells her that she is dead meat.

Will Amulya be able to save herself from Vedanth’s wrath? What is Parimala going to do now? To find out you have got to stay tuned folks.

To watch all Kannada entertainment on ZEE5, click here.

With No Director Onboard, The Cast And Crew Of Raambo 2 Stepped In And Saved The…

Huliraya: Did You Face The Same Problems As Suressa When You Newly Moved To…

The ZEE5 Original Series Kaafir Is A Subtle Eye-Opener And A Good Lesson On Humanity, Love And Religion. Click Here To Watch This Show On ZEE5 Now

Gattimela 18 September 2019 Episode Written Update: Amulya Gets Caught In Her Own Trap?