On tonight's episode, while goons threaten to turn Pari's house upside down for their money which Manjunath borrowed, Vedanth catches the wrong girl! 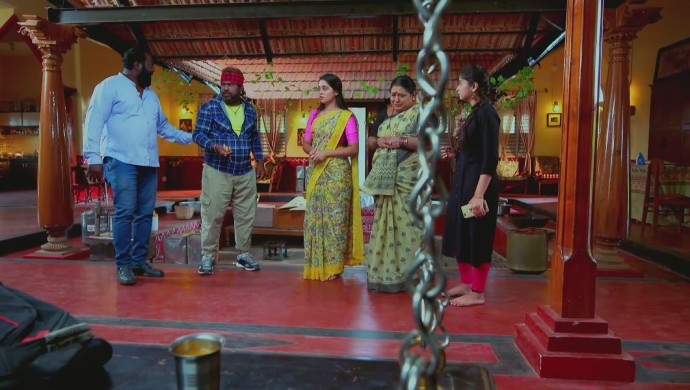 In the previous episode of Gattimela, Kantha comes up with a counter plan to ensure Vedanth’s stalker is caught and sends a text to the girl asking for to meet-up. Amulya, who assumes that it is Vedanth who is messaging her, is surprised that she was able to convert the latter so easily. Meanwhile, Vicky goes to Aarthi’s house to celebrate the six-month anniversary of the day when he first saw her. In the end, Sarika attempts to stop Amulya from being successful in her plan while Vedanth is furious when he calls the stalker and Amulya’s phone starts ringing instead.

On tonight’s episode, when Vedanth calls the stalker and Ammu’s phone rings, somehow she avoids getting caught by pretending to talk to Sarthak and informing him about the meeting. She quickly goes to aside and puts her phone on silent to avoid getting caught for real. Elsewhere, a few minutes after Adithi reaches home, the money-lenders from whom Manjunath has taken a loan come home.

Upon seeing two unfamiliar men when Adithi calls out to Pari, she comes down from her room and goes to the door. Just then the goons enter the house and start looking for Manjunath. At the park, Amulya tries to distract Vedanth by telling him that wandering in a public park like this isn’t good for his image but the latter starts quarrelling with her.

Ammu then pretends to play dumb and asks him why he has brought her to the park after lying to everyone stating they are going for a meeting. At the Manjunath house, the goons by this time barge into the house and one of them starts searching for Manjunath. After what seems like a million attempts to convince that Manjunath is not at home and that they don’t have any money, the goons don’t budge.

Aarthi then quietly goes to her room and brings all the jewellery her parents had kept for her wedding at falls at the goons feet. Pari, who is shocked to see this, pulls her daughter her and asks her what’s going on. To this, Aarthi opens her hands and shows all the jewellery and offers it to the goons asking to take it and not create a ruckus. At the park, Amulya continues to argue with Vedanth as to why he has brought her when she had so much of work.

Vedanth snaps back at her confessing that he knows she and Vicky play games all day. As Ammu is wondering how her boss knows about this she suddenly notices Vedanth angrily staring at a lady in a Red dupatta (the same outfit he had messaged his stalker to wear while meeting him). Back at home, after doing a thorough search of the house, the goon tells his companion that except a manky old bike outside the house, there isn’t anything valuable they can take as collateral.

Adithi pleads with the men, but they forcibly take ‘Rani’ and come back to inform the ladies that they can have their jewellery and bike back if they ask Manjunath to decently return the money. Helpless, Pari and her daughters stand there in tears after the goons finally leave. At the park, Vedanth marches towards the lady wearing the red dupatta and Amulya, who gets hyper that he is going to the wrong lady, follows him shortly after.

After a round of firing when the lady protests, Vedanth gets angrier and continues to insult her until she finally calls out to her boyfriend. Much to Vedanth and Amulya’s shock, the lady’s partner turns out to be bulkier than Vedanth and looks at him with rage. At Padma’s house, as Aadya and she are cleaning the vegetables, Sarika comes home exhausted. In her mind, she wonders if Swathi executed her plan impatiently.

Elsewhere, when the man threatens to beat Vedanth, Amulya comes in between and gives him and his girlfriend the fake story that her boss is retarded. After many efforts, they believe her and go away. At the end, when Amulya asks Vedanth as a joke about what he would do if he actually found the girl, he grabs her arm tightly looks in her eyes and tells her that he will kill the lady who did this.

What is Sarika’s actual plan? How is Amulya going to save her self from Vedanth’s wrath? You’ll find out only if you stay tuned to the next episode.

Naagini’s Amrutha Should Be Your All-Time Nail-Fashion Guru. Here Are 7…

Kamali Actress Yashaswini’s Special Moments With Her Doggie Coco, Will…

If You Have A Bunch Of Siblings like Gattimela’s Amulya, These 5 Things…

Subbalakshmi Samsara To Yaare Nee Mohini: 3 Kannada Shows That Are Based On Love Triangles