Vedanth tells Amulya not to worry as he will make sure that Aarthi gets married to Vikranth. 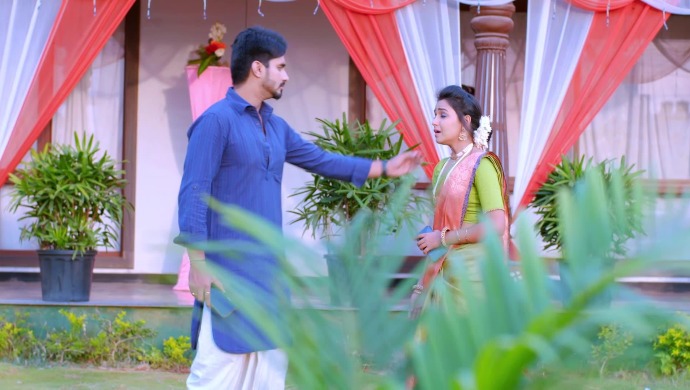 In the previous episode of Gattimela, Amulya figures out from the video that Aarthi has been kept in the gym that she and Vedanth go to. As she sees the idol of the Bhajrangi kept behind her in the video, she tells Vedanth that she has been in that room and the rowdies are the same ones who attacked her.

Anju tells Adithi on stage that the girl sitting next to Vikranth is Sarika and not Aarthi. Pari and Manjunath are unaware of this. Suhasini, on the other hand, tells Ajji that they should now proceed towards the two getting married instead of performing so many rituals. Sarika is waiting excitedly while Ajji is looking out for Druva to come with Aarthi. They try to delay the marriage as much as possible. Amulya, on the other hand, runs to the entrance to see if Druva and Aarthi have come. Suhasini, however, suspects that Ajji has discovered the truth about Sarika which is why she is delaying the marriage. Druva and Vedanth coordinate with each other. When Druva finds Aarthi, he sees that they have beaten her up. Druva picks up a fight with the goons and takes Aarthi goes out of the gym.

Later, Vedanth and Amulya have a conversation about Aarthi. He tells her not to worry as he will make sure that Aarthi gets married to Vikranth. Amulya thinks of all the wrongs that can happen if Aarthi does not reach on time. She also tells Vedanth that her sister will be heartbroken if she doesn’t marry Vikranth. Meanwhile, Sahithya sees him consoling Amulya and gets angry with the same.

With Suhasini’s insistence, the rituals for the two to get married takes place. Ajji relentlessly makes more and more excuses so that the marriage is delayed. She also says that the bride is required to wear the saree that is given by the groom’s side before she gets married. Just as Druva and Aarthi try to leave in the auto, someone hits Druva’s head from behind.

Mother’s Day Spl: These Pics Of Zee Kannada Actors With Their Moms Are…

Should Anu Tell Her Father Subbu About Her Feelings For Arya?