In this episode, Vedanth and Vicky go to Aarthi's house by disguising themselves as workers. Also, Sharada figures out that Vedanth is following her! 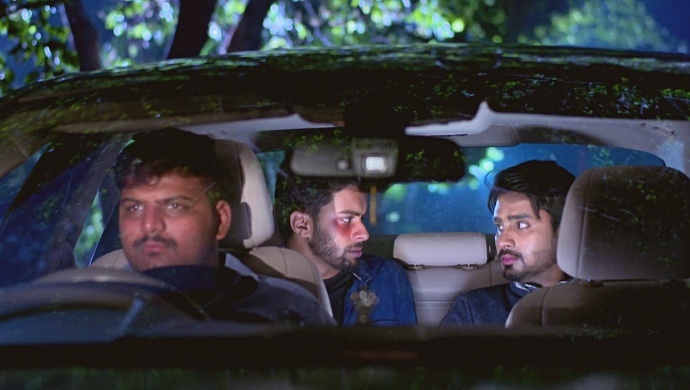 In the previous episode of Gattimela, Parimala and Amulya somehow miss meeting Sharada’s husband as they are getting late to go back home. Aadya and Sarthak arrive later at night, to stay till the wedding and help with all the ceremonies. The next day, a small accident makes Vedanth and Sharada come face-to-face. Once he recognises her, he tries to follow her home. At the Manjunath house, Amulya tries to get a leave request for her sister’s wedding but fails as Vedanth is in no mood to approve. He, however, gets caught red-handed by Sharada who notices him following her.

On tonight’s episode of Gattimela, Vedanth curses his luck about following a woman and continues to see where Sharada is headed to. A few more steps later and without warning, Sharada turns to see Vedanth stoked by this gesture. Quickly to cover up his tracks, Vedanth takes out his phone and pretends to be on a call. Sharada, however, recognises him at the car guy and understands that he is following her. She tries to divert her route and pretends everything is fine. Vedanth, who by now knows that she has figured it out, decides to follow her some more and get a picture as proof to show that ‘bajaari’ in his office. Unfortunately, Sharada is successful in misleading and makes a smooth escape. Elsewhere, Suhasini is upset when both her boys aren’t available to eat food together and wonders why so much has changed in the Vashishta household.

At the Manjunath house, Parimala is pleased to welcome Padma and Sarika just the Chapra Pooja begins. Meanwhile, Vedanth gets irritated with Vicky for insisting on coming to drop off the gift for Aarthi. To this, Vicky makes fun of Vedanth by taunting him for going to meet ‘his girl’ (Amulya). Vedanth gets furious and recollects Vicky’s response to Gautham’s true nature and gives him some other excuse as to why he wants to meet her. Back at the house, the pooja continues in full swing as everyone happily gathers around outside the house. Soon, Amulya and Sarthak are asked to do a few things as part of the rituals but to lighten the mood Anju throws in a joke causing everyone to laugh. After stopping some distance from the Manjunath house, the Vashishta brothers think of a way to get near the house without being detected.

Looking at a fruit truck outside the Manjunath house, Vedanth gets an idea to enter the house. Vicky is impressed when Vedanth tells him to cover his face with a Banana Bunch. Just then, Sharada is seen walking to Amulya’s house. Luckily for Vedanth, he realises someone is standing behind him and goes away in the other direction with the Bananas. Amulya, who notices Sharada is pleased to welcome her into the house. The latter then requests Amulya to introduce her to Aarthi and is made to sit inside. Vedanth and Vicky, who enter the house then look around for their respective hudugis and the former is lucky as Amulya is seen welcoming other guests into the house. Vicky then excuses himself to go find Aarthi, much to Vedanth’s annoyance.

When he turns to see where Amulya is, he finds her missing and then learns that she is headed to the kitchen. However, just as he is about to enter the kitchen, Parimala calls him from behind, much to his astonishment. Elsewhere, Vicky somehow makes it to Aarthi’s room only to dash into Sarika by mistake. While he escapes her eyes, after a while Sarika realises that the man (Vicky) had a familiar voice.

Will Sarika catch Vicky red-handed? What will Parimala do when she finds out about Vedanth? Stay tuned to find out.

If you are looking for entertainment, there is no better platform than ZEE5.

Watch All The Episodes Of Oggarane Dabbi To Revive Some Great And Yummylicious Recipes This Monsoon, On The ZEE5 Platform

The Mid-Week Playlist Of Your Favourite Romantic Kannada Songs Is Ready. Are You?