Gattimela 19 February 2020 Written Update: Amulya And Vedanth Feed Each Other During Lunch 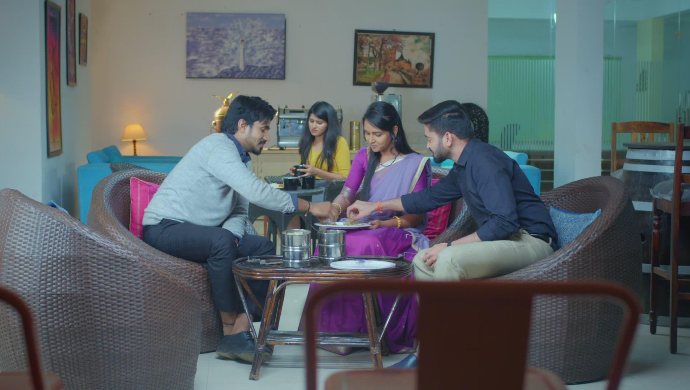 In the previous episode of Gattimela, Vedanth finds his desk arranged in the manner he desires. He also senses his favourite lime air freshener and tells Kanta that he finally knows how Vedanth likes his cabin. Kanta tells him that he did not do anything and it was all Amulya’s effort. He calls in Amulya and the two share a romantic moment.

Amulya feeds Vedanth and Sarthak. Sahithya who is sitting behind them is staring at her thinking why she is trying to get so close to Vedanth. She does not like the fact that the man she is getting married to or rather wants to get married to is sitting and eating with another woman. However, she also knows that Vedanth and she have only had an agreement to pretend to be in love only until Vikranth and Aarthi get married. Meanwhile, the three continue to eat lunch together. When Amulya says she has had enough, Vedanth tells her that she is as thin as a broomstick because she does not eat well.

At the Manjunath house, Amulya’s father has bought Druva a new auto so that he can earn a living. They all wish him luck and tell him to start driving this auto in order to make a living in the meanwhile. Druva expresses his gratitude and is ready to start driving the auto.

Kanta, on the other hand, tells Sahithya who has ordered food for Vedanth, that he only eats homemade food and not any other cuisine other than Indian. Later, Sahithya tells Amulya that she has to talk to her and it is urgent.