Gattimela 18 September 2019 Episode Written Update: Amulya Gets Caught In Her Own Trap? 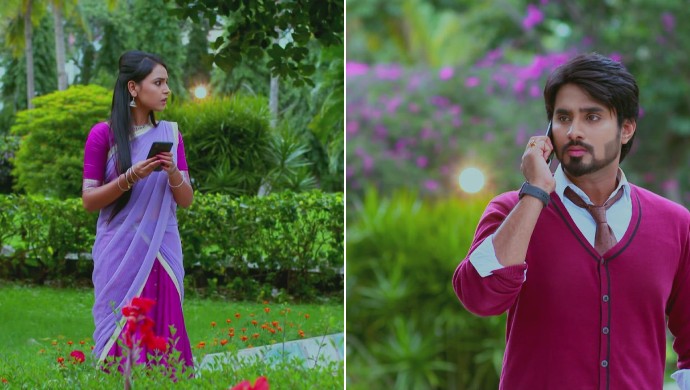 In the previous episode of Gattimela, Kantha offers his help to Vedanth to figure out what to do to avoid the stalker. Soon, as Sarika and Amulya are fighting over authority outside, Kantha informs the latter that Vedanth has called her to his cabin immediately. When Amulya doesn’t do so, Vedanth marches to her work desk and takes her by the hand to his cabin. This causes Sarika to doubt the two of them. In the end, Vedanth confesses to Ammu that apart from Aadya in his life, he is only comfortable talking to her. He then reveals about the stalker and asks for Amulya’s help.

On tonight’s episode, just as Amulya celebrates her little victory in her cabin, Kantha goes to Vedanth and asks him if the former agreed to help them on this stalker issue. Kantha then gets a plan and messages the stalker to meet him at some park wearing a red dupatta so that she can be recognised. Initially, Amulya is shocked after reading this message assuming that Vedanth is the one to have sent the message.

Elsewhere, when Parimala asks Vicky who he has got the flowers for, he gets nervous and loudly announces that the flowers are for her. With a sarcastic taunt about falling in love without fear but to give flowers to her daughter he is so scared, Parimala leaves the two lovebirds and goes to do her work in the kitchen. Meanwhile, Amulya recovers quickly from the message and gives a positive response to meet Vedanth.

Assuming that Shunti has actually fallen for her, Ammu leaves the room making a romantic comment on him which Sarika, who is standing a little distance away, overhears. She then plans to stop Amulya’s plan no matter what it may be. Soon, Sarthak asks Amulya to accompany him for lunch but she rejects it on the account of too much work. When he emotionally blackmails her for sending him dressed as a lady to Vedanth’s house, Amulya asks him to keep it low.

Suddenly, she spots Vedanth and worries that her secret is out in the open but luckily the latter has no idea what’s going on. Instead, come he asks Ammu to accompany him to a meeting outside. At the Manjunath house, Vicky reminds Aarthi that he got her flowers because it has been six months since she came into his life. Even though he showers her with romance, Vicky notices something off about Aarthi’s behaviour but doesn’t prove much into it.

Elsewhere, Sarika catches hold of an employee in their company called Swathi and offers her five lakhs for her father’s cancer cure in exchange for executing one of her plans. After much consideration, Swathi agrees. In the car, Amulya has a nightmare in the daytime as she sees Vedanth sending goons after her for troubling him posing as the stalker. Suddenly she snaps out of it causing Vedanth to get alarmed and ask her what is happening.

Much to her horror, they arrive at the same park that Ammu was dreaming about, a short while later. At the office, Sarthak asks Sarika to get some work done but smells something fishy in her tone when he speaks about Vedanth and Amulya. In the end, Vedanth, who looks around for his stalker gets tired at one point and calls her up. He is enraged when he realises that Ammu’s phone is ringing and she seems uncomfortable.

Did Vedanth just catch Amulya red-handed? What is Amulya’s punishment for this grave mistake? Stay tuned to tomorrow’s episode to find out.

Have you watched the Puneeth Rajkumar starrer Doddmane Hudga, if not, click here to watch the film on ZEE5 right away!

Have You Watched The Hit Film Seetharama Kalyana Yet? If Not Click Here To Begin Your Romance Drama Journey, Only On ZEE5

Gattimela 19 September 2019 Preview: Vedanth THREATENS To Kill Amulya For What She Did