Amulya figures out from the video that Aarthi has been kept in the gym; She calls Druva 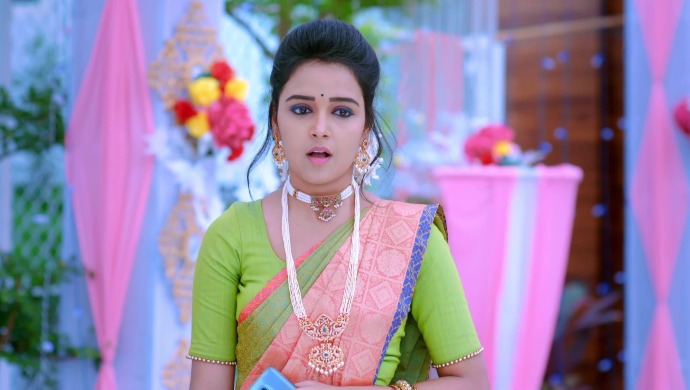 In the previous episode of Gattimela, Adya stops the marriage and asks Vikranth to take the veil off as the girl he might have gotten married to is Sarika. They all ask her where Aarthi is. However, this turns out to be a dream. Adya snaps back to reality and decides to tell Vikranth. When Adya tries to tell him about it, he tells her that he is already aware. Adya goes and tells Vedanth that Sarika is the one sitting next to him at the temple.

In this episode, Amulya shows Vedanth the video that Sarika has sent her. In the video, Aarthi is seen being tied up with a bunch of rowdies keeping an eye on her. Meanwhile, Anju tells Vedanth and Adya about Sarika and her previous attempt to get married to Vikranth. She tells both of them how Sarika took Vicky to the temple to get married to him in his unconscious state. Vedanth is taken aback when he hears this.

Adya tells Ajji everything that has happened. She also tells Adya not to create a scene as it is a marriage house. Ajji takes control of the whole situation. Elsewhere, rituals are being performed before the actual marriage takes place. Vikranth is oblivious to the fact that it is Sarika who is sitting next to him. At the mandapa, he tells Sarika, thinking she is Aarthi, about how lucky he feels to get married to her. When he asks her where the ring is, she makes an excuse of having removed it while bathing. Vikranth gets suspicious.

Later that day, Amulya figures out from the video that Aarthi has been kept in the gym that she and Vedanth go to. As she sees the idol of the Bhajrangi kept behind her in the video, she tells Vedanth that she has been in that room and the rowdies are the same ones who attacked her in the past. She immediately calls Druva who then goes to the gym as he is close by. Druva goes to rescue Aarthi.

Gattimela: Will Amulya Be Able To Find Her Sister Aarthi?