In this episode, while the pre-wedding rituals begin in full-swing, Aadya and Sarthak arrive at the Manjunath house. Also, Vedanth follows Sharada 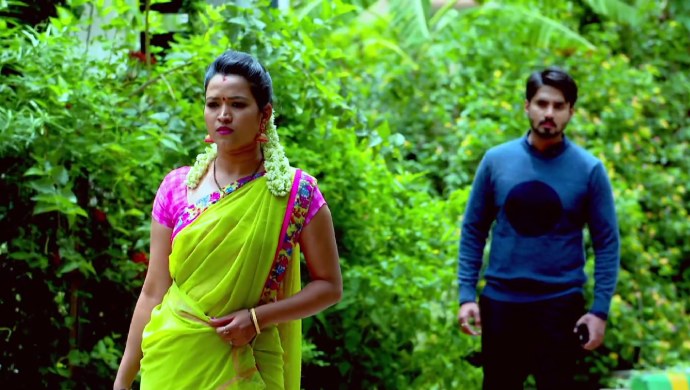 In the previous episode of Gattimela, Sarthak and Aadya get to know why Vedanth and Amulya are hanging out so much and promise to support them at all costs. Later in the day, Parimala and Amulya chance upon Gautham’s first wife Sharada at the temple because she collapses unconscious. They then take her home. There, Amulya seems very interested in the wedding photo kept in the other corner of the room. However, no matter the efforts Amulya fails to see Gautham’s photo with Sharada. Elsewhere, Vedanth reveals the truth about Gautham to Sarthak and to his surprise, the latter believes him. Soon, just as Amulya and Parimala are leaving Sharada’s house, Gautham enters their parking lot.

In tonight’s episode, after Parimala and Amulya come out of the washroom, they are surprised that no one is at home. When Sharada tells them that her husband is gone to get sweets, Parimala excuses herself and Amulya on the account that they are getting late to go home. While they are leaving Parimala invites Sharada for the pre-wedding ceremony for Aarthi the next day. At night, everyone at the Manjunath house is busy in the preparations when Parimala asks Amulya to check some food item she has prepared and asks Aarthi to go and take some rest. Just then, a pleasant surprise arrives there in the form of Aadya and Sarthak.

Elsewhere, Sharada requests Gautham to take her to the pre-wedding ceremony, but he claims to have some big work from tomorrow and excuses himself. But when he promises to accompany her to the wedding itself, she is thrilled and praises him. Meanwhile, as Vedanth is cursing himself for being born before Vicky, he gets a message and looks at his phone without paying attention to the road. And behold! His car goes and hits Sharada, who was trying to cross the road while vegetable shopping. As a result, she is bruised. Vedanth, who is sure to have seen Sharada somewhere before makes sure if she is okay. After she leaves, he finds her wallet and is shocked to see her and Gautham’s wedding photo in it. That’s when it flashes to him that she was the same lady who sat behind Gautham, the other day.

At the Manjunath house, as Amulya is getting Aarthi ready for the ceremony, she realises that in trying to unite her sister and Vicky, she just lost track of time. They are then reminded that time is very less before Aarthi leaves their house. This makes extremely emotional and Aarthi and her younger sister hug it out. To lighten the mood, Amulya goes back to cracking silly jokes and makes fun of her future husband. Vedanth, on the other hand, is confronted by Sharada, who returns to take her wallet. He then decides to follow her unsuspiciously to find out where she and Gautham actually stay. For the same, he parks his car to the side and follows her on foot. Back at home, Parimala is delighted to see Aarthi dressed beautifully for the occasion. Soon, Aadya and Amulya get into a conversation about Vedanth, that he will be upset to know that the latter has taken leave without permission.

To fix this, Amulya calls up Vedanth. He, however, somehow escapes getting caught by Sharada and angrily tells her that only after she has properly sent a mail regarding the leave will she get it. He continues to follow Sharada and wonders what his life has come to. Just then and without a warning, Sharada turns behind and catches Vedanth red-handed.

Will she tell Gautham everything? What will Vedanth do now? Stay tuned for the next update to find out.

Did You See The Folk Song Round On Sa Re Ga Ma Pa Li'l Champs Season 16 Yet? Click Here To Watch It On Your ZEE5 Now