On tonight's episode, Vedanth makes a shocking confession to Amulya while Sarika gets upset with the latter and decides to teach her a lesson! 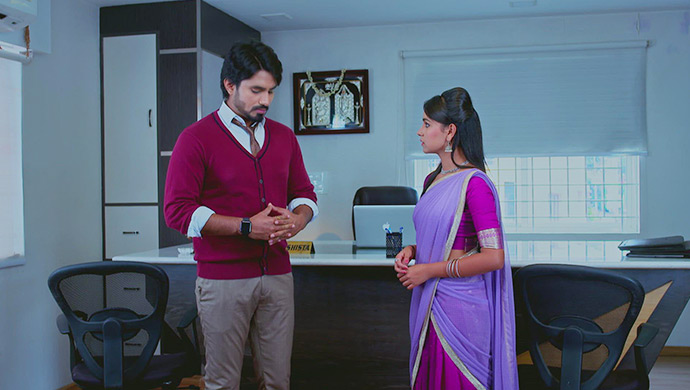 In the previous episode of Gattimela, Amulya and Sarthak, who are relieved that Vedanth bought their little charade, are shocked when he chases the latter. Ammu stresses out at home about what will happen to Sarthak, while Kantha and Vicky, who are returning from a movie, see a man (Vedanth) chasing a lady (Sarthak) and assume he is trying to harm her. Later, Sarthak makes a narrow escape while Vedanth yells at Kantha and Vicky for letting such a good lead slip away.

On tonight’s episode, as Kantha brings in the medicine that Vedanth had asked for, the latter explains that he is extremely stressed out because of the stalker lady who is constantly harassing him. When Vedanth asks Kantha if it is advisable to launch a police complaint, the latter advises the former against it as it could be a plausible cause for bad publicity.

Meanwhile, Aarthi overhears her mother praying to God to help with all the loans Manjunath has taken and feels bad for her parents. After Pari comes out of the pooja room and is about to ask Aarthi about something, the telephone rings and the former goes to answer it. A few seconds later, she is furious when the person on the other line mentions Manjunath’s name with disrespect.

The thug on the other end of the line warns Pari that if she doesn’t want them barging into their house, she had better send Manjunath with the four lakh rupees amount by tomorrow. Aarthi, who finds out about this from her mother worries about what will happen too. At the office, Sarika tries to boss around Amulya but to no avail. Ammu snaps back at Sarika and asks her to mind her tone as she is the head admin as opposed to her meagre HR post.

Just as they are arguing Kantha arrives there and tells Ammu that Vedanth has summoned her to his cabin immediately. After telling Kantha to tell Vedanth that she will be in the cabin in five minutes, Ammu also warns Sarika that she is doing her work only so that work doesn’t get delayed. Amulya also warns Sarika never to treat her with disrespect in the office again after throwing a taunt about how people can get into any company without merit and with influence.

A few moments later, as Amulya is sorting through the file, Vedanth comes there, grabs hold of her hand, and takes her to his cabin. Sarika, who notices this from a distance is puzzled about what just happened. She tries to follow them but fails to find out what is happening. To his surprise, Vedanth asks Kantha to get out of the cabin after bringing in Ammu.

Vedanth, who at this point, is still holding Amulya’s hand tightly let’s go after she complains that her hand is hurting. He soon comes to the point that some lady is stalking him. While Amulya stands in disbelief, Pari and Aarthi sit and wonder what to do and how to tackle this loan situation. Just as they are brainstorming about this, Vicky arrives at the Manjunath house and clearly it isn’t a good time.

Vedanth then tells Amulya that he isn’t comfortable to discuss this stalking problem with any other woman except Aadya and now her. Amulya stands stunned at these words while Sarika plots to teach her cousin a lesson for getting her scolded by Suhasini, who isn’t ready to believe that Vedanth has started liking Ammu. In the end, Amulya agrees to help Vedanth and goes to her cabin to do a little happy dance of her own.

How is Vedanth going to find out about this stalker? Will Amulya get caught? Stay tuned to the next episode to find out.