On tonight's episode, after informing his mother that the engagement will happen according to how he wishes it, Vedanth carries Ammu to the car! 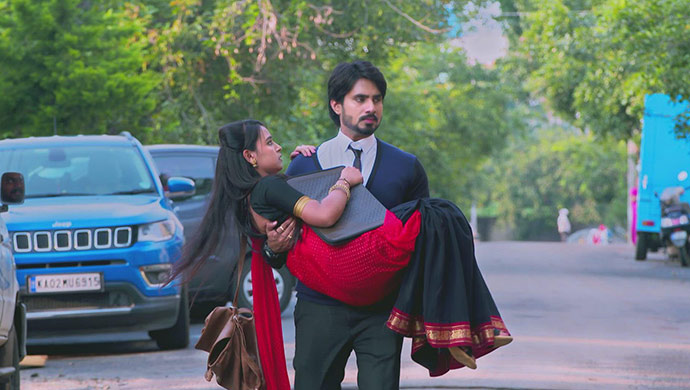 In the previous episode of Gattimela, Vedanth asks Amulya if she wants a drop to the office after fighting with her for some time. On the way, Ammu gets uncomfortable to learn that she will have to wait at the Vasishta house until he gets an important work file. A mishap causes Suhasini to verbally abuse Ammu and speak in a demeaning manner about her entire family. In the end, Vedanth enters the house just when Suhasini is rebuking Amulya and the Manjunaths.

On tonight’s episode, just as Suhasini is telling Amulya that the engagement will happen exactly how she wants it, Vedanth arrives home and interrupts his mother. Much to her further astonishment, as Suhasini is explaining why she said what she said, Vedanth breaks in once again and asks Amulya to tell him what’s happening.

While a seething Suhasini watches, Amulya confesses of the Rs 12 lakh that have been demanded from her hand-to-mouth working parents. A shocked Vedanth immediately accuses Suhasini of being unfair to the Manjunath family, who genuinely cannot afford such an expensive engagement.

Amulya, who stands relieved, then looks at Vedanth with affection when he continues to make a statement to everyone present there that the engagement will happen according to how he wants it. He also adds that no imposition will put on Parimala and Manjunath in terms of the finances.

Elsewhere at the Ashwath house, Aadya is puzzled when she sees Padma lost and worried about something. Despite asking her many times, Padma politely walks away from the conversation, leaving Aadya in a state of doubt. At the Vashishta house, Suhasini immediately changes her tone and tells Vedanth that if this is what he wants, so be it.

As an excited Amulya leaves the house soon, she trips on the stairs and falls into Vedanth’s arms. After a brief dreamy moment when they both come to their senses, Amulya realises that she has accidentally twisted her ankle. As they are walking to the car, which is parked at a distance, Vedanth notices Amulya limping and probes into the matter.

He then accuses her of melodrama when she falls on the road and is unable to get up because of the pain in her foot. After taunting him for offering no help, Amulya is stunned when in a few seconds Vedanth not only offers his hand as a help for her to get but also carries her in his arms later when she is still not able to get up.

Ammu taunts Vedanth about keeping his public appearance and this causes a quarrel between the two, but he still continues to carry her. In the evening, Suhasini, who is removing her frustration on her brother, is surprised to see Vedanth home from work early. Just then Sarika repeatedly calls Suhasini causing her to answer the call so that the former can hear what is happening.

Vedanth asks his mother to get ready quickly which confirms Sarika’s doubts as to where they might be going to. While Amulya clears Aarthi’s tension about the finances for the engagement, Sarika, Suhasini and Vedanth arrive at the Manjunath house in the end.

Why has Vedanth got Suhasini to the Vashishta house? What is Sarika doing here? Stay tuned to find out in the next episode.

Akhilandeshwari To Annapoorna: 5 Actresses Whose Evergreen Beauty Continues To…

From Amrutha To Kamali: 7 TV Actresses Who Nailed Their No-Makeup Looks With…

Watch The ZEE5 Original Kannada Film Bhinna, Streaming Now For Your Eyes Only!