Gattimela 17 May 2019 Preview: Sarika Spots Vicky And Aarthi Flirting In Under Her Roof

Vikranth is so engrossed in his lady-love, that he forgets the whole world and flirts with her through his eyes. Sarika, however, observes everything. 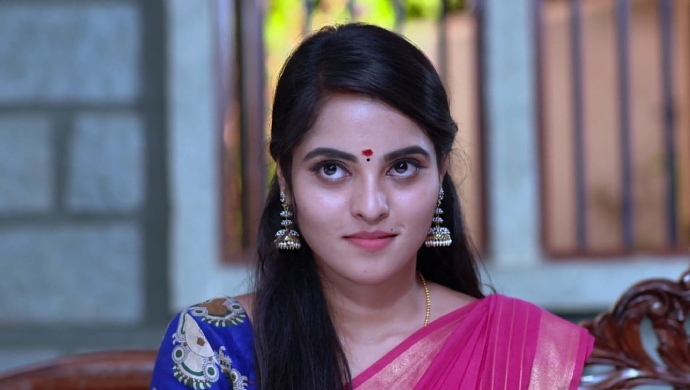 On the previous episode, Vedanth leaves no chance to taunt Amulya, who somehow makes it to the offshore site on her ‘rani’. Luckily for her soon Vedanth’s luck runs out when Kantha leaves his car keys, inside the vehicle, causing it to get auto-locked. Somehow, Kantha then pleads to Amulya to take Vedanth on her bike for an important meeting he can’t miss. After extensively denying this idea, Vedanth has no choice but to go with Amulya, but to the latter’s delight. Elsewhere, while Vicky is ecstatic to see Aarthi in Aadya’s house, for Suhasini and Parimala, the situation becomes awkward.

In the next episode, as Vicky is drinking his glass of juice, he finds Aarthi keeping the glass she drank from on the table. An idea strikes him and he quickly exchanges his glass with hers. Aarthi, who is completely blushing by now, understands this gesture and shyly takes Vicky’s glass. The two lovebirds are completely oblivious to the fact that Sarika, seated at some distance from them, sees everything and starts boiling with rage. Elsewhere, Vedanth, who is sitting behind Amulya on their ride, constantly curses his fate for landing him such a day.

What will Sarika do now? How will Vedanth overcome this awkward moped-ride? Find out in the next episode.

Watch all your favourite Zee Kannada shows, with just a click of a button, only on the ZEE5 platform.

If You Are A Fan Of The Rocking Star Yash, Don't Miss His Hit Action Film Rajadhani, Streaming In HD On The ZEE5 Platform

Did You Know That The Director Of Rajaratha Anup Bhandari Acted In The Film Too?

Gattimela 16 May 2019 Written Update Of Full Episode: Vedanth Hitches A Ride From Amulya