On tonight's episode, Vedanth runs after the woman (Sarthak) under his balcony while Kantha and Vicky assume he is a thug trying to molest a woman! 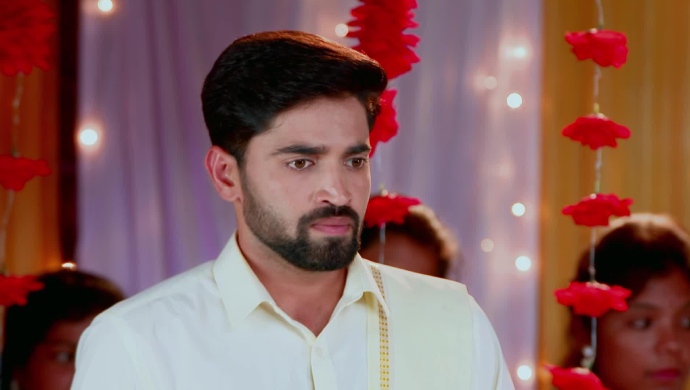 In the previous episode of Gattimela, Vedanth looks for wedding card designs for Aarthi and Vicky while Amulya calls him posing as the stalker he hates so much. Ammu also calls Sarthak for help just as he is about to have a romantic moment with his beloved wife Aadya. Before long, Sarthak is standing outside Vedanth’s house dressed as a lady in a saree and a wig, with heart-shaped balloons. Amulya’s flirting continues as Vedanth learns that she is outside his house. In the end, Vedanth is in disbelief to see actual heart-shaped balloons flying up to his balcony.

On tonight’s episode, Amulya continues to flirt with Vedanth and tells him to look down from his balcony if he doesn’t believe in her love. Upon spotting a lady in saree downstairs, a shocked Vedanth cuts the call and goes out of the balcony. Sarthak, who starts talking to Amulya about their successful plan, is soon asked to leave the place. However, he is taken aback when Vedanth reaches the basement and is almost about to catch him.

This  is  followed by a chase sequence as Vedanth angrily runs after the so-called ‘lady’. Meanwhile, Kantha informs Vicky that every boss should be like him and not Vedanth. While they are discussing if there is actually something going on between Vedanth and Amulya, she tries to get in touch with Sarthak and goes into hyper-mode to find out that Vedanth is chasing after him.

Meanwhile, at Sarika’s home, as she is sitting in deep thought, her father comes and sits next to her. Sarika then tells him that she suspects that Amulya is trying to win Vedanth’s heart. When he asks her to get into the matter directly, she agrees and thinks about her plan further. Elsewhere, Amulya instils patience in Sarthak to keep running and avoid getting caught by Vedanth at all costs.

As they both are running, Kantha chances upon his senior boss and tells Vicky, who ignores his silly thoughts. Upon closer inspection, Kantha assumes that the man is chasing the woman to molest her. Vicky and Kantha soon get into the chase and end up blindfolding Vedanth just as he is about to catch Sarthak, assuming that he is a thug.

While Sarthak informs Amulya that everything is fine, after many efforts Vedanth, who frees himself from Vicky and Kantha, stares at them in anger. At the Manjunath house, Amulya gets excited that she won’t be caught and is having fun when Adithi, Aarthi and Anju come to join in on the fun.

How is Vedanth planning to catch this stalker woman? What is Amulya’s next plan of action? To find out stay tuned.

To Know What Happens When Two People Go On A One-Day Trip And Things Don't Go Their Way, Through The Hit Film Raambo 2, Streaming Here On ZEE5