On tonight's episode, Vedanth who takes Ammu with him to office, makes a stop at his house on the way. There, Suhasini rebukes Amulya thoroughly! 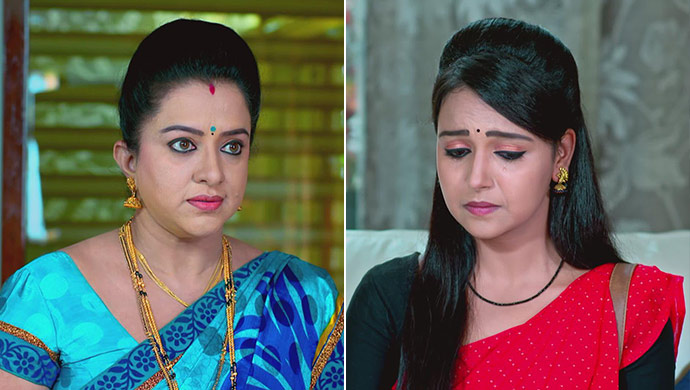 In the previous episode of Gattimela, Amulya goes to a pawnshop near her house and with a heavy heart, tries to sell off Rani. Meanwhile, Vedanth spots her on his way to work and stops to find out what is going on. Upon learning what is happening, he feels bad for her and decides to pay off the price money for Rani, without letting Amulya know. Later, after talking to Aarthi, Vicky confronts his mother and learns a shocking truth.

On tonight’s episode, as Amulya is rebuking Rani for giving up on her, she spots Vedanth standing at a distance looking at her. Upon learning that he saw her standing here before also, Ammu asks Vedanth why was he observing her so much. To divert the topic Vedanth then offers to drop her but she puts forth the condition that she will sit in the back seat.

Annoyed, Vedanth takes back his offer and asks her to do whatever she wants as long as she reaches office on time. To this, Ammu quickly corrects herself and graciously accepts her boss’s offer to drop her. On their way, Amulya realises that Vedanth is going towards his house and questions him.

He snaps back at her that he is heading this way as he has some important file to collect for a meeting at work. Further, he adds that she will have to wait at his house till he comes back. Once he drops her Ammu wonders how to handle Suhasini while waiting at his home.

Inside, Suhasini gets upset with Paramananada for whiling away time when the maid realises that she has left the plate of auspicious rice at the doorstep. By the time she goes to the door, Suhasini calls out to her loudly. Amulya who just reaches the doorstep then trips over the plate of rice causing it to make a mess all over.

Just then Suhasini arrives there and is furious with Ammu. Elsewhere, Pari and Manjunath, who’re trying to sell the ancestral jewellery, are initially shocked when Adithi comes there with her gold chain in an attempt to sell it too. They get emotional when Adithi tells them that nothing is more important for her than Aarthi’s wedding.

At the Vashishta house, Amulya, who is about to leave quietly after the incident, is called into the house by Suhasini. Thanks to Paramananda, Suhasini insults Amulya and her family gravely assuming that she has come to talk about reducing the engagement amount.

Meanwhile, as Aarthi and Vicky are speaking about this issue at her home, Pari, Manjunath and Adithi come home. When Aarthi decides to call off the wedding if there are so many problems just from the engagement, Pari tries to make her daughter understand that some things are not in our control especially when it comes to weddings.

Back at Suhasini’s house, she continues to demean the entire Manjunath family in front of Amulya despite her protests. Just then they realise that Vedanth has already entered the house.

Did he hear Suhasini scolding Amulya? Will Vedanth take a stand for the Manjunaths? Stay tuned, we’ll find out soon.

Watch The Latest Episodes Of Your Favourite Show Kamali, Streaming Here On The ZEE5 Platform

Gattimela 17 October 2019 Preview: Vedanth Stands Up To His Mother For The First Time