In this episode, Vedanth doesn't let the pooja go waste and gives Vicky an idea of how to take blessings from the priest with Aarthi. Read more here! 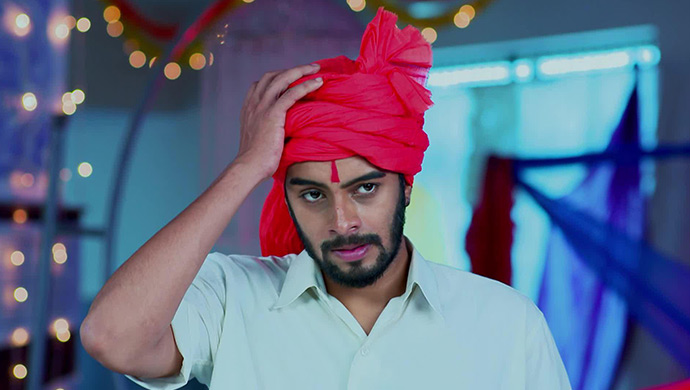 In the previous episode of Gattimela, Aarthi and Vicky get to spend some romantic moments in the dressing room, while Amulya and Vedanth get into a never-ending argument as usual. Meanwhile, Gautham tells Sarika that his real plan is to stick to the original plan that he made with Vedanth and Amulya, but while doing so, his aim is to ensure Vicky is arrested. Later, the pooja begins and Aarthi is called to sit next to Gautham, much to her hesitation. Seeing this Adithi, Anjali and Vedanth become teary-eyed.

On tonight’s episode, Vedanth, Vicky and Sarthak watch helplessly as Gautham and Aarthi proceed with the rituals. Sarthak tries to console Vicky but in vain. Once the pooja is over as Aarthi is about to get off the stage, Gautham holds her hand, much to her astonishment and asks her to accompany him to take blessings from the priest. While Gautham bends down first to take blessings he then starts insisting a reluctant Aarthi to bend down too. Just then, Vedanh gets an idea and informs the same to Vicky through actions. Just as Aarthi is about to touch his feet, Vicky throws a flower garland at the priest’s feet and coordinates his timing with Aarthi.

This way it seems that they both take blessings from the priest together. While everyone else is happy at this view, Sarika and Gautham get highly upset. Soon, Aarthi rushes to the dressing room and starts crying inconsolably about Vicky’s helpless state. Her three sisters and Aadya console Aarthi, and leave her alone for a bit. Meanwhile, while Sarthak and Vedanth look at the plan forward, Parimala realises that her thaali is missing and gets worried. Manjunath, who spots Vedanth and Vicky is puzzled to see them sitting at one spot. He soon blocks Vicky’s path and questions him about his identity. Manjunath soon grabs hold of Vicky’s collar just as Vedanth rushes to stop the fight.

Sarthak, who arrives there just in time and tries to save the Vashishta brothers from Manjunath’s wrath, but fails. Finally, a huge scene is created and Vedanth and Vicky have no option but to reveal themselves. However, when Vedanth apologises to Manjunath about how his mother treated Parimala, the latter forgives him. Vicky then reveals that in order to avoid any more misunderstandings they had decided to dress up and come to the wedding. Parimala then welcomes both of them with some kind words, much to Sarika’s annoyance. In the end, after some apologies, Parimala asks Sarthak to escort the two brothers to their rooms. All is well again, except Sarika’s mood.

What will she do now? Will Parimala accept Vicky for Aarthi? Stay tuned to tomorrow episode to find out.

Watch your favourite Kannada movies, here on the ZEE5 platform.

If You Weren't Able To Catch The Celebration Round On Sa Re Ga Ma Pa Li'l Champs Season 16, Click Here To Stream It On The ZEE5 Platform

Inspired By Rishi-Kamali's Jathaka Hondanike, Here’s What Kundali Matching Is All About