On tonight's episode, Vedanth, who feels bad for Amulya when she sells off her Rani to collect money for her sister's engagement, does the unthinkable 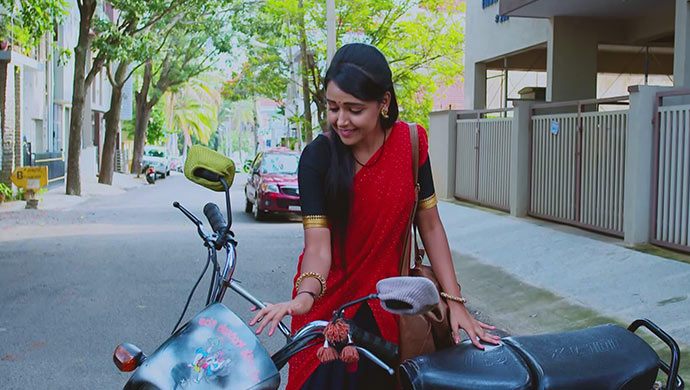 On the previous episode of Gattimela, despite Sarika snitching on them, Amulya and Vicky are lucky when Vedanth doesn’t find out what they are planning. At the Vashishta house, Suhasini plays innocent and tells the Manjunaths to contribute a huge amount for Aarthi-Vicky’s engagement, i.e, approx Rs 12 lakh. Amulya, who finds something fishy about her parents’ mood, tries to ask Vedanth about it but fails. It is not long before a devastating truth hits her when she overhears her parents talking about Suhasini’s demands.

On tonight’s episode, Amulya, with a heavy heart, decides to sell off her Rani. Meanwhile, Vedanth, who is on his way to the office, spots her and stops the car to find out what’s happening. Vedanth feels bad watching her apologising to Rani for pawning her due to her circumstances.

Finally, when she learns that selling Rani off would get her more money with tears in her eyes Ammu bids adieu to her best friend and life. As she is walking away trying to recollect her memories with Rani and assuring herself that what she did had to be done, the pawnshop broker comes rushing after her.

Finally, when he manages to get her attention, she is surprised to find him bringing Rani along. Soon, Ammu is thrilled to learn that the pawnshop owner has decided to let her have the money and the bike out of his goodwill. However, the broker looks at Vedanth who is standing behind a tree and a distance and smiles recollecting how he paid off the debt for Rani.

A smile slips from Vedanth’s face when he sees Amulya crying tears of joy while hugging her Rani. At home, a teary-eyed Aarthi call’s Vicky to inform him of the grave situation her parents are in as she learns they are out to sell the jewellery they have for the engagement. Before she can say she is thinking of calling off the wedding, Vicky stops her and promises that he will get to the bottom of this.

Later, while Amulya isn’t able to get her Rani started no matter how much she tries, Vicky confronts Suhasini. When he learns about his mother’s actual intention (of cancelling this proposal), Vicky is shocked! In the end, as she is cursing Rani, Ammu is surprised to see Vedanth standing a little distance from her.

To find out what happens next in the upcoming episode, stay tuned.

Zee Kannada Kutumba Awards 2019: Cast Your Vote For Your Favourite Shows And…