Gattimela 15 May 2019 Written Update Of Full Episode: Vicky And Aarthi Spend Time Together

Amulya's pranks are hilarious and finally helps her get away with the overtime. In other news, Vicky, the romantic, climbs a ladder to meet Aarthi! 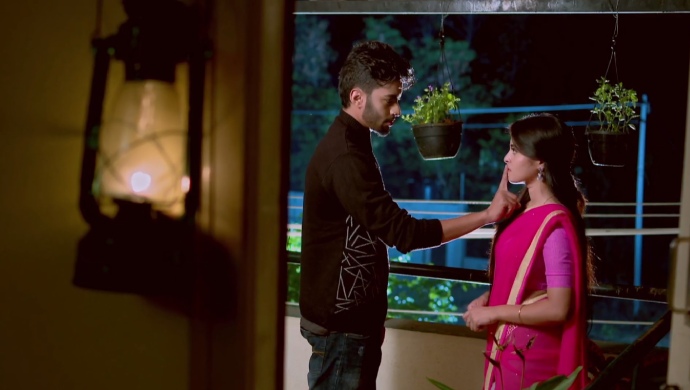 In the previous episode, Gautham convinces Amulya and Vedanth that he is on their side by saying that he will walk off the marriage altar so that Aarthi’s image isn’t ruined. Sometime later at the office, Amulya prank calls Vedanth several times because of his punishment decision. When all her efforts fail, she directly goes to Vedanth and tells him that her team cannot work overtime. Vedanth uses this opportunity to put her in a tough spot by offering her a deal. It entails her colleagues being excused if she does overtime in their place. Later, Aarthi is heart-broken to know that from her mother that Vicky is set to marry Sarika.

On tonight’s episode, Amulya continues pranking Vedanth till he gets quite upset and smashes the phone to the table. Upon asking Kantha, who could possibly be irritating him, the latter suggests that it could be someone from the office. Vedanth’s face lights up instantly and he goes out to check if anyone is out of their place. Luckily, a few moments before, Amulya and her gang go back and sit in their place as if nothing happened. After Vedanth goes back to his room, Amulya continues her sweet torture by pretending to be Pramoda Devi, the lead representative of the Bengaluru Mahila Rakshana Aayog and informs him of a complaint that has just come in against him. She further states that he is accused of recently hiring a team of women and torturing them with overtime.

She continues by saying that if he wishes to make them work, to arrange for a cab facility for them. Thanks to this little stint, Vedanth buys into her threats and assures her nothing of that sort is going on. He then asks Kantha to inform everyone that they don’t have to work overtime from tomorrow onwards. Outside his cabin, all her comrades thank Amulya for helping them through the overtime issue. At the Manjunath house, Aarthi stands alone on the terrace, lost in thought about Vicky’s marriage to Sarika, when Amulya arrives there. As she begins telling her younger sister that she is upset because Vicky didn’t tell her about this before, they both hear his voice out of nowhere! When they look down, they are shell-shocked to see Vicky up their balcony on a ladder.

They quietly pull him up and shout at him for coming without informing and that too on a ladder. Finally, Amulya understands that he has come to speak with Aarthi and excuses herself on the pretext that she will keep guard downstairs, to ensure no one comes. Vikranth and his love Aarthi are finally able to spend some quality time and maybe a few romantic seconds even but not for long. Amulya, Aarthi and Vicky are shocked when Parimala starts calling out for her eldest daughter. Saying that Adithi has gone on the terrace a fearful Amulya prevents her from going there, but luck doesn’t seem to favour her. Adithi sleepily walks out of the bathroom but runs back immediately inside when Amulya signs to her. After sending Parimala away, Amulya signals Adithi quietly about what is happening. She then goes to the terrace and shoos Vicky away.

The next day, on the way to Padma’s house, Anjali throws a tantrum about playing some game or listening to some music on Aarthi’s phone. However, Aarthi worries that while Anjali is using her phone, what if Vicky calls? Luckily for her, Parimala supports this asks Anjali to sit quietly. At the office, Amulya and Vedanth cross paths causing the latter to get irritated. He then plans to somehow fire Amulya from his company. Meanwhile, in his cabin, Kantha chills on his chair just as Vedanth walks in. Kantha makes a clean escape for this situation by portraying to be cleaning his bosses chair. Soon, he starts informing Vedanth about the work cut out for the day which includes a visit to an off-site located 40 kilometres away from the city.

Suddenly an idea strikes Vedanth. He asks Kantha to call Amulya into his cabin and informs her that she is to accompany him. Vedanth immediately prepares to leave but not before Kantha whispers to Amulya about where they are going. When he asks her how she is planning to get back from a place that has no bus facilities, a shocking realisation dawns on Amulya.

Will she accompany Vedanth even now? What will he say when she tries to back out? Find out in the next episode.

Watch your favourite Kannada shows, on the ZEE5 platform for free.

Watch The Latest Episodes Of The Mythological-Fiction Show Mahadevi, Streaming For Your Entertainment Pleasure On The ZEE5 Platform

Gattimela 16 May 2019 Preview: Vedanth Gives Amulya A Tough Time During The Offsite Visit