In this episode, Vicky and Aarthi spend some romantic moments together while Gautham tells his actual plan about the wedding day to Sarika. 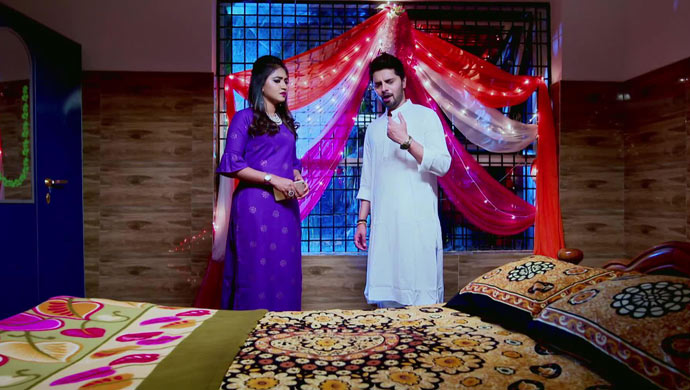 In the previous episode of Gattimela, without anyone’s notice, Vedanth helps to fix Parimala’s flower decorators problem by arranging for a new decorator. Enter, Radha, a sweet girl, who takes care of all of Parimala’s tensions. Meanwhile, Amulya is scared when she sees Vedanth’s fake moustache slipping off and decides to do something about. After much argument and persuasion, Vedanth finally bends down so that she can fix his moustache with her own hands. In the end, Amulya feels puzzled when she finds out who sent the flower decorators.

On tonight’s episode, Vedanth talks to the private investigator agency and is frustrated when they find nothing about Sharada or Gautham. Elsewhere, Parimala sadly accepts a duplicate thaali from Manjunath on the account that people will talk about her wearing an ordinary thread. Meanwhile, in the dressing room, Vicky goes to meet Aarthi. While she is initially very excited to see him she realises what a blunder it would be if anyone sees them. Sarika, on the other hand, thanks Gautham for all his help as she may or may not see him after he sells Aarthi and escapes.

Much to Sarika’s surprise, Gautham reveals that tomorrow at the wedding, his hired police will come and make an arrest on Vicky’s name, stating that he is a Casanova and has cheated women for money. While going to the venue, Vedanth and Amulya come face-to-face and neither of them is interested to give away for the other to go. After a fight and Amulya almost thinking that Vedanth held her saree from behind (he didn’t, the saree got stuck in his watch by mistake), the former finds her younger sisters. When they talk rudely about Vedanth, she asks them to talk about him with respect, much to Adithi’s astonishment.

Meanwhile, as Vicky and Aarthi are having a romantic moment, Aadya arrives there and disturbs their romantic bubble. Just then Paramananda arrives at the location and gets a call from Suhasini, who asks him to stop whiling away time and get to the task at hand. After narrating his entire plan to Sarika, Gautham and she shake hands for the last time before dispersing without drawing attention to them. Soon, the pooja begins and Aarthi is called out to sit next to Gautham. Looking at her and Vicky’s devastation, Anjali, Adithi and Vedanth become teary-eyed.

Will Vedanth successfully stop the wedding? Stay tuned for the next update to find out.

Watch The Grand Finale Of Weekend With Ramesh Season 4, Streaming For Your Entertainment On The ZEE5 Platform

Gattimela 16 July 2019 Preview: Manjunath Gets Furious With Vicky And Goes To Beat Him