On tonight's episode, Suhasini gives a shocking amount to Manjunath and Pari for the engagement expenses. This causes Ammu to do the unthinkable! 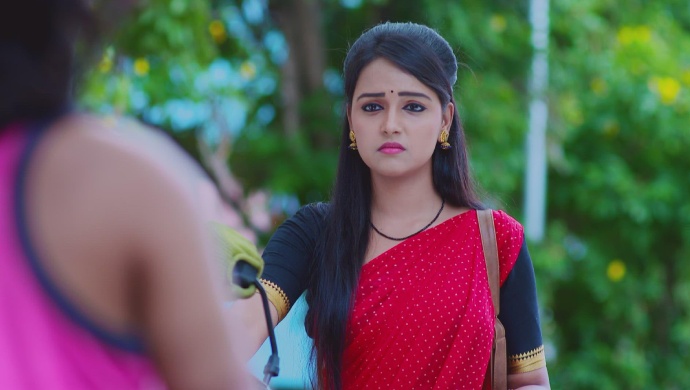 In the previous episode of Gattimela, Vedanth is worried for Amulya, who faints in his arms. He tries to bring her back to consciousness but soon realises that she was pranking him. This causes him to get extremely upset with her. Soon, Ammu and Vicky plan to send messages to Vedanth posing as the stalker while Kantha helps his boss give apt responses. Sarika, who stands outside Vicky’s cabin, decides to tell Vedanth the truth and goes to his cabin. Elsewhere, Pari and Manjunath reach the Vashishta house to discuss the engagement.

On tonight’s episode, as Vicky and Amulya are talking about Vedanth, he arrives in the cabin much to their shock. Luckily for both of them, despite Sarika going behind their back, Vedanth doesn’t realise what Ammu-Vicky are up to and scolds them for whiling away time during work hours. Meanwhile, at the Vashishta house, Suhasini indirectly tells Manjunath and Pari that they don’t have to worry about the costs.

However, Suhasini soon asks them to share the bill of 25 lakhs for the wedding and also tells them that her family will give more, i.e, 13 lakhs. She then shows them the bill and tells them that they will have to pitch in the remaining 12 lakhs. At night, Amulya comes home with sweets after learning that Manjunath and Pari had gone to the Vashishta house to discuss the engagement.

However, when they both arrive they give an excuse to the girls about being tired and go to their room. This causes Amulya to get a doubt if something went wrong in the meeting. Elsewhere, while Vicky shows his enthusiasm towards his mother for ensuring the meeting went smoothly, Suhasini later lies to Vedanth that she asked the Manjunaths to let her pay for the entire engagement but Pari insisted that they will share half the expenses.

While Vedanth is happy with his mother, Suhasini, in a soliloquy, rejoices that with the huge expense list given to Pari-Manjunath they will never return to her house. At home, Amulya decides to ask Vedanth if he knows why her parents her so low this evening but he ends up picking a fight with her.

After he hangs up Ammu accidentally overhears her parents talking about the reason why they are troubled and is shattered to hear that Suhasini has asked them to pay 12 lakhs just for the engagement. The next day, Amulya unwillingly goes to sell off her Rani and meets an old friend at the pawnshop. Vedanth, who is on his way to work, spots her on the way and stops the car to see what is going on. He gets worried in the end to see Amulya’s sad face.

Will Vedanth help her with her problem? How will Ammu arrange for 12 lakhs? Stay tuned to find out folks.

Mohit Raina And Dia Mirza Have A Splendid Job In The ZEE5 Original Series Kaafir, Now Available In Kannada