In the next episode, Amulya wonders why Vedanth is behaving so odd when it comes to her. He then saves Ammu from falling, but in the most unusual way! 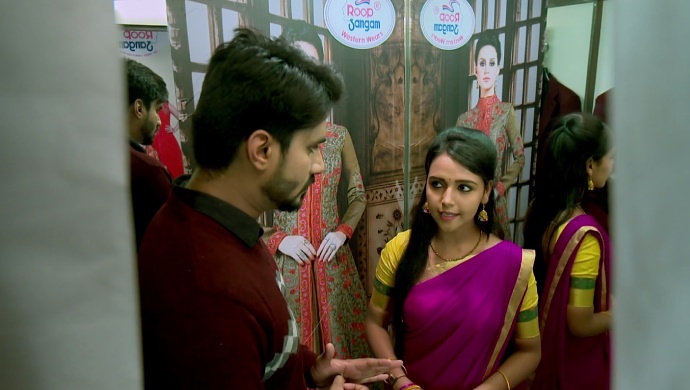 In the previous episode of Gattimela, Aadya, Sarthak, Parimala and Aarthi, all end up in the same saree shop that Vedanth and Amulya go to. First, Vedanth spots Aadya and Sarthak and goes to hide in a changing room. Amulya, on the other hand, spots Parimala and Aarthi first and rushes in the other direction only to see her sister-in-law an brother. To save herself from the double-trouble, Amulya rushes and hides in the same cubicle as Vedanth, unknowingly. Their argument makes Vedanth want to leave the changing room. But just as he is about to do so, Amulya pulls him back to avoid being seen. This scuffle brings both of them inches away from each other aka very close.

In the next episode, when Vedanth shouts at Amulya about the fact that she might have got hurt if he actually fell on her, she feels weird about his concern. He also taunts her about how thin she is, causing Amulya to doubt his intentions by wondering why he is constantly changing the topic. Vedanth interrupts her thoughts and asks if she said anything just now. To this, Amulya responds that she doesn’t want to talk to him anymore. Just as is getting ready to leave, her leg trips on something causing to almost fall. Of course, Vedanth grabs her by the waist, to stop her from falling. The minute he touches her stomach, Amulya becomes speechless and looks at him in disbelief.

Is love in the cards of these two enemies? Who will fall for the other first? Stay tuned for the next update to find out.

Watch the hit film Doddmane Hudga, in HD on the ZEE5 platform.

Watch The Superhit Jodi Recreation Round On Sa Re Ga Ma Pa Li'l Champs Season, Streaming For Free On ZEE5