On tonight's episode, Amulya puts her life at risk to save Vedanth and he looks at her equally worried. Later, problems between Suhasini and Manjunath 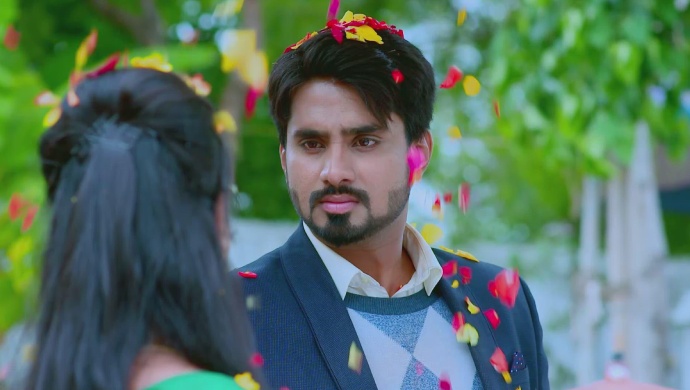 In the previous episode of Gattimela, when Amulya prays to God to show a glimpse of her one-true-love, Vedanth enters the temple and appears in front of her eyes. She rubs her eyes to check if it’s really Vedanth and upon confirmation, Amulya faints on him. Meanwhile, Suhasini announces to Manjunath and Pari that Vicky and Aarthi’s wedding can take place only after Vedanth is married. Later, while Vedanth and Amulya have a spat, their respective siblings find their quarrel adorable and leave them be.

On tonight’s episode, Adithi is impressed with Vedanth and thanks to him for paying Parimala’s hospital bill. After telling her not to tell anyone, Vedanth leaves from there. Elsewhere, Vicky and Aarthi finally get some alone time and the former gets flirty, much to the latter’s shyness. Suddenly, they hear a loud commotion in the temple and people rush after a snake that slithers into a hole. As they are trying to bring it out of the hole to kill it, Vedanth arrives there and realises in a few minutes, what is going on.

He then pushes the villagers away from the hole and asks them not to be hypocrites seeing as today is Nagarapanchami. He also tries to save the poor animals life by asking the locals to open their eyes and see what they are trying to do. Amulya reaches there by then and confirms with the people gathered that a snake only attacks when it feels threatened. A few moments later, everyone is shocked to see the snake slithering out and standing in attack position next to Vedanth’s legs.

He, however, doesn’t realise what is going on and is about to move when Amulya stops him and signals him to look down. Shocked looking at the snake, Vedanth stands still. Amulya in a moment of reflex picks up the snake and rushes to an anthill in the temple that can accommodate snakes too. Vedanth, who panics, rushes after Amulya and pulls her away from the anthill by grabbing her hand. They share a romantic moment before Amulya snaps back into reality by telling Vedanth that he is holding her arm too tightly.

They simultaneously ask each other whether everything is fine. When they go back to the group, Suhasini and Parimala worriedly ask their children if they are alright. Parimala then goes to Vedanth and accidentally puts her hand near Suhasini’s hand. Disgusted Suhasini walk away causing everyone to rush after her. Manjunath, who gets upset with the way she has treated them angrily calls to his children and takes them away while Suhasini takes Vicky back home. Vedanth tries to speak to the Manjunaths with Sarthak but fails to convince them.

Amulya leaves but not before turning to look back at Vedanth. At night, Suhasini scolds Sarika for interfering in her plan and asks her to leave from her sight while Manjunath asks Aarthi to Vikranth home the next day to discuss something important.

Is Sarika turning enemy for Suhasini? What is Manjunath thought process like? Stay tuned to tomorrow’s episode to find out.