Gattimela 13 May 2019 Written Update Of Full Episode: Sarika Finds Out A Shocking Truth

After listening to the voice recording, Sarika makes a new plan that involves Gautham. On the other hand, Amulya and Vedanth have a bad day altogether 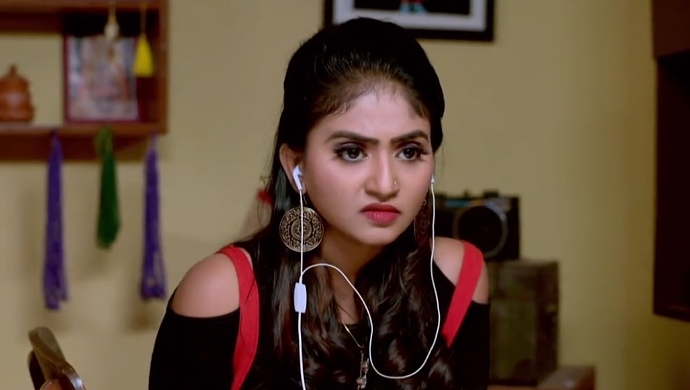 In the previous episode of Gattimela, while Amulya establishes herself back into Vedanth’s company, Sarika spies on Aarthi to know what is going on between her and Vicky. Thanks to Sarthak, Amulya finally signs the papers of her reinstatement and makes Vedanth sign it too. She then finds her table in the office and places an idol of ‘bajarangi‘ followed by some arisina-kumkuma, some flowers and a small prayer. On one hand, Sarika is successful is getting a video recording of Aarthi’s secret conversation to someone, the new women team in Vedanth’s office, thank Amulya for her contribution to the company.

On tonight’s episode, an irritated Amulya washes her face while cursing Vedanth for his sensitivity to ladies perfume and decides to raise her voice about it. Elsewhere, Sarika listens to the voice recording and gets furious. She then somehow leaves the house but not before promising to teach everyone a lesson. At Vedanth’s office, he is shocked to receive a video clip of breaking news about him allowing women into his office to work. He gets upset and curses people who are against his success. To refresh when he goes to the bathroom, he is even more irate to see a bindi (a sticker that is placed on the forehead of a woman) stuck on the mirror.

He then creates a big scene and mentions that there is a separate women’s toilet arranged for the ladies, so there was no need for a woman to enter his private bathroom. When he screams again, an employee speaks the truth. And oh yes! It turns out to be Amulya’s after questioning them. Although she tries to defend herself, the consequences for her actions result in two hours of overtime every week for all the other female employees too. Elsewhere, Sarika instigates Gautham to forcefully take back his love by speaking ill of Vikranth. She brainwashes him so much that Gautham is forced to rethink his decision.

At the office, the all-women team go to Amulya to ask her for help against the punishment given to them by Vedanth. Just as she is given them words of comfort, Vedanth asks her to follow him to a meeting outside of the office. Meanwhile, as Gautham is waiting, Amulya and Vedanth reach the place he called them to. He then tells them that he was very sorry to hear about Aarthi and Vicky’s secret wedding breaking up and gives them another idea instead. When Gautham advises that things should stay as planned and he will sit at the altar with Aarthi, Amulya is shellshocked while Vedanth furiously grabs hold of his collar.

Did Gautham fall for Sarika’s trap? What will Amulya say to Gautham’s idea? To find out, stay tuned.

Watch the action-drama film Thayige Thakka Maga, if you are a fan of the evergreen Sumalatha Ambareesh, streaming now on the ZEE5 platform.

Bookmark Chemistry Of Kariappa On Your Weekend Binge-Watch List And Don't Forget To Watch It With Your Family, On ZEE5

Vinaya Prasad And Shashikumar Had Memorable Moments On Weekend With Ramesh 4: A Recap