Gattimela 11 October 2019 Preview: Amulya Gets Vedanth Extremely Worried About Her

In the next episode, Vedanth scolds Ammu in front of Kantha about how careless she is and what would he have done if something happened to her! 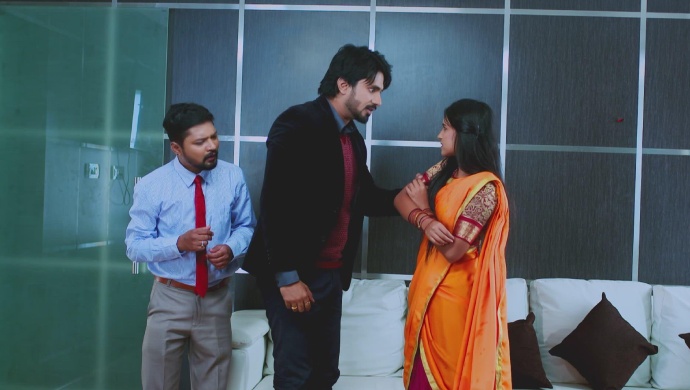 In the previous episode of Gattimela, Vedanth helps Amulya when soap gets into her eyes while washing the dishes and also later helps in kickstarting the love of her life, her bike Rani. Later, Aadya winks at Ammu when Vedanth taunts her by using her own dialogue against her. In the office later, as Vedanth throws the stress ball in his hand towards the door, Amulya enters just then and gets hit by the ball. She ends up fainting in his arms, just as he reaches her in time.

In the next episode, Kantha watches as Vedanth grabs hold of Amulya’s arm tightly and rebukes her about who she thinks she is. He continues yelling at Ammu stating that she worried him and he got the fright of his life because of her. As he is asking about what he would have done if something happened to her, they both get lost into each other’s eyes deeply.

During this time, Kantha goes and stands in between them watch with rapt attention. He then laughs loudly, calling out to his boss and breaking their romantic bubble in a split second. It doesn’t take long for the situation to get awkward very fast.

What caused Vedanth to worry about Amulya? Does Kantha have a doubt on them? Monday’s episode will give you all the answers, stay tuned.

Watch Premier Padmini if you are a fan of the Navarasa Nayaka Jaggesh, streaming here on ZEE5.

Husi Nagu Is A Brilliant Women-Centric Thriller ZEE5 Original Series That You Must Bookmark For Binge-Watching This Weekend, Now Available In Kannada