On tonight's episode, unknown to Vedanth, Amulya plays a prank on him of fainting. However, he is not very happy when the learns the truth! 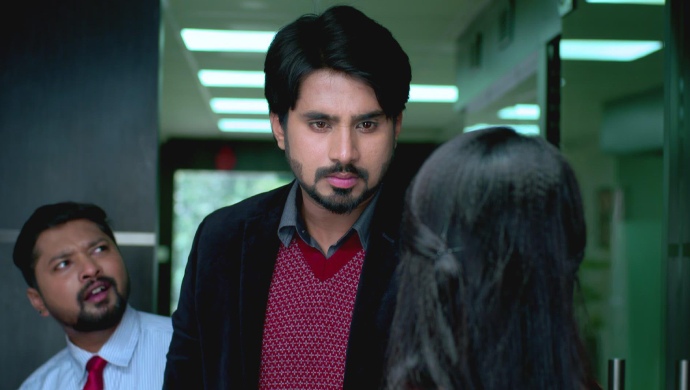 In the previous episode of Gattimela, Vedanth helps Amulya get the soap out of her eyes and also successfully kickstarts the love of her life, Rani. Soon, Aadya winks at Ammu when Vedanth heckles her by throwing her own dialogue at her. Later, in the office, as Vedanth throws the stress ball in his hand towards the door because the stalker who has returned to his life, Amulya enters at that time and gets hit by the ball. In the end, she faints in his arms, just as he reaches her in time.

On tonight’s episode, Vedanth tells Kantha about the menace of a stalker who had stopped messaging him after the arrest has started her shenanigans again. As Kantha is telling him to be careful as women are unpredictable, Vedanth throws the stress ball in his hand in the direction of the cabin door. Much to his astonishment, Amulya enters the room just then and gets hit by the ball.

She then faints but not before Vedanth grabs hold of her preventing her from falling. As Kantha watches, he takes her to the couch and starts shouting at her for giving all the build-up that she is the ‘Rowdy Baby’ but when even a light stress ball can harm her. Soon, he sprinkled water on her face and realises that she was pretending all this while. Immediately, he grabs hold of her hand and rebukes her for getting him concerned unnecessarily.

As they both stay silent and get lost in each other’s eyes, Kantha circles around them a couple of times before bursting the romantic bubble and calling out to his boss. What’s more? After collecting the incidents of yesterday, Vedanth then scolds Amulya for being such an irresponsible employee and masks his emotions by telling her to come next time to meet him only with an appointment.

At home, as Manjunath is praying to God, Pari explains to Aarthi that today is the day they have to go an discuss with the Vashishta family about the preparations for her and Vicky’s engagement. Soon, Pari and Manjunath into a romantic argument that causes Aarthi to laugh adorably at her parents. Kantha, by this time, tries to convince Vedanth that they have to make a fool-proof plan to catch the stalker.

Amulya, who is calmed down by Vicky for the way his brother behaved with her, starts to message Vedanth just as Kantha tells him to pretend to be sweet with the stalker to get her information. At the Vashishta house, Suhasini gives her house-helps a tough time when they don’t make the house spik and span for the soon-to-arrive downmarket guests (the Manjunaths).

She then explains her plan to insult Parimala and Manjunath to Paramananda, who joyfully supports his sister and shows anxiousness to watch the so-called ‘show’. Meanwhile, while Vedanta gives Kantha the responsibility to reply to the stalker, Sarika, who stands out of Vicky’s cabin trying to listen in on what he and Ammu are planning, decides to stop whatever it is they are doing.

Just then, Ammu gets a reply from Vedanth’s number and thrilled to show the message to Vicky, as it asks her why she didn’t turn up at the park the other day. As they are texting back and forth, Sarika arrives at Vedanth’s cabin and asks to speak to him about something important. Elsewhere, Sridhar is delighted to have Pari and Manjunath at their home and immediately invites them in.

However, Suhasini and Paramananda, who constantly try to make Pari and Manjunath feel small, are rebuked by Sridhar, who gets irritated with their behaviour. When Manjunath continues to inform them that since they have taken the responsibility of taking care of the Nischithaartha of Aarthi-Vicky, they would like more details about the guests, venue, any other customs and rituals that the Vashishtas follow etc.

To this, Suhasini smirks when she informs the Manjunaths that she isn’t expecting a ground as big as Palace Grounds looking at their background, but they can at least book Leela Palace for the engagement. Pari and Manjunath look at each other stunned!

How will Aarthi’s parents afford an engagement in Leela Palace? Did Suhasini just get what she wanted for so long? Monday’s episode will give us the answers, so stay tuned.

Watch Premier Padmini if you are a fan of Jaggesh, here on ZEE5.

You Can Now Watch All The Episodes Of Your Favourite Show Yaare Nee Mohini, Streaming On ZEE5, Anytime, Anywhere