In this episode, Amulya calms an irate Anju down and then explains to her Aarthi's situation. Later at night, Vedanth sends Amulya to the godown! 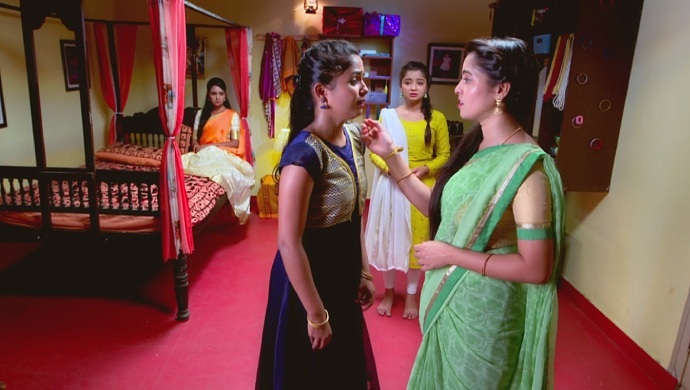 In the previous episode of Gattimela, the address which Vedanth goes to find out about Gautham’s second family is a fake, much to Amulya’s relief. Meanwhile, Vicky and Aarthi’s date at the temple goes smoothly they get talking about each other. Anjali, who follows Aarthi reaches the temple and is shocked to see her sister with Vicky. After Vicky leaves the temple, Anjali catches Aarthi red-handed and promises to Parimala everything. Somehow, Amulya finds out about this and tells Adithi to control their youngest sister. Later, a nasty message from Gautham appears on Vedanth’s phone and he hands it over to Amulya to see for herself.

On tonight’s episode, much to Vedanth’s disappointment, by the time Amulya checks his phone, Gautham deletes the message. This causes her to think that he has some serious mental problem, much to his annoyance. At home, Adithi has a difficult time trying to calm an irate Anju down, who is hell-bent on telling the truth about her sister to Parimala. Luckily for them, Amulya comes just in time to try and control Anjali. Soon, Manjunath comes home and somehow the three sisters stop their youngest one from blurting out the truth to him. Finally, Amulya gets upset and drags Anjali to their room to explain things to her. Meanwhile, Vicky gets irritated when his mother tries to emotionally blackmail him. While Vicky is relieved to see Vedanth arrive home just then, he is startled when the latter goes straight to his room instead of joining them for dinner.

In his room, Vedanth realises that there is no way anyone else is going to believe the truth he has seen and decides to do something about this Gautham situation on his own. Back at the Manjunath house, Aditha and Aarthi enter their room to see Anjali crying inconsolably. She then apologises with all her heart and continues crying. However, all is good in their life as the fourth Manjunath sister joins the rest of the group in ensuring Aarthi gets all the happiness she deserves. Parimala, who comes in later to check up on her girls is filled with emotions when she sees them laughing together. At night, Amulya is annoyed to see a call from ‘Shunti Shankra’ and wonders what he wants now. Upon learning that he has arranged for some work for her at this time of the night, she retaliates but in vain. He threatens to terminate the challenge and thereby accept her defeat if she doesn’t agree.

At the company godown, while Amulya is aligning all the company trucks to one side, there is heavy lightning in the sky. When she asks one of the drivers if they will be unloading everything right away, the man reminds her that a storm is at bay and asks her to go home as well. All of a sudden, it dawns on Amulya that she didn’t carry anything to cover herself because of Vedanth’s urgency. She also realises that her phone is out of charge and worries about how to contact anyone. Just as she is asking for her Bajarangi’s help, it starts pouring like cats and dogs. At home, Parimala worries about Amulya and informs Manjunath about it. He then decides to go looking for her. Aarthi, on the other hand, worries about Amulya’s office secret and decides to deal with this situation without giving anyone else a hint.

How will Amulya get home? Will her health be okay? Stay tuned to the next update to find out.

Watch your favourite Kannada movies, on the ZEE5 platform here.

Watch The Sumalatha Ambareesh Episode Special On Weekend With Ramesh Season 4, Only On The ZEE5 Platform

Gattimela 12 June 2019 Preview: Vedanth Is Shocked To See Amulya Working In The Rain