In this episode, Vedanth and Vicky enter the venue where Aarthi's wedding is to take place much to Amulya's dislike. Will she help them blend in? 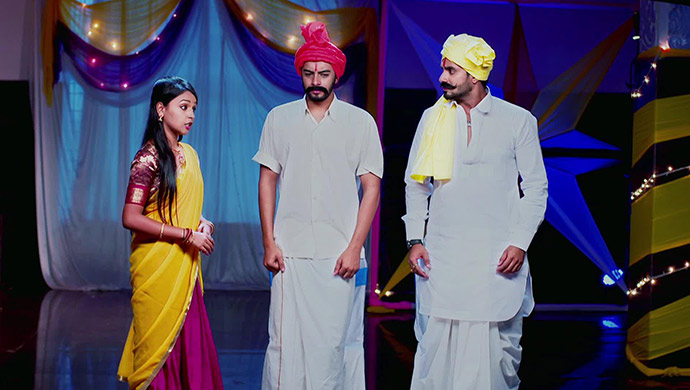 In the previous episode of Gattimela, when Gautham introduces his accomplices to Vedanth, he gets very angry. Vedanth then promises to uncover Gautham’s true face in front of everyone by leaving no stone unturned. Meanwhile, at the Manjunath house, much to Parimala’s delight and Sarika’s chagrin, Amulya brings Aadya and Sarthak home. Elsewhere, Vicky gets angry with Vedanth for interfering in his wedding business and asks him to back off a little. In the end, when Gautham sends a car for Amulya and her family to travel to the wedding venue, they are all excited.

On tonight’s episode, Suhasini and Paramananda are surprised to see Vedanth and Vicky all packed. Upon probing into the matter, they find out that the brothers are headed to Mumbai for a meeting. While Paramananda and Suhasini both find it difficult that Vicky too wants to go for a business meeting, the brothers somehow give an excuse and leave. On their way to the venue, Sarthak calls Vicky and then requests him to pass on the phone to Vedanth. Then, Sarthak tells his brother-in-law that Gautham sent a car for the family to stay in their good books, much to Vedanth’s annoyance. He then asks Vedanth to get to the venue as soon as possible.

Meanwhile, the Manjunath family awaits Gautham and his family at the venue when Aadya wonders where Sarthak is. Sarika who is standing behind Aadya rejoices when Sarthak arrives there and expresses his annoyance towards Gautham. Soon the pooja begins and Gautham’s family is welcomed into the hall. At that time, Vedanth and Vicky arrive there but the former complains his brother that Sarthak isn’t receiving his phone. Vicky then taunts his brother to contact his ‘best friend’ aka Amulya, causing Vedanth to get angry with him. Out of no choice finally, he dials Amulya’s number and asks for Sarthak. When Amulya finds out that Vedanth and Vikranth have both come to the venue she gets very tensed goes to find them.

Upon finding the Vashishta brothers, she scolds Vedanth and grabs him by his hand and takes him away. Vicky stands with his jaw-dropped as he isn’t able to digest what he saw. After taking them a certain distance away, she then tells the brothers that since she can’t make them go back if they want to stay at the venue, they will have to change their getup into something people can’t recognise. The end result is hilarious and both Vicky and Amulya start laughing at the way Vedanth looks. Once she orders Vedanth to say that he and Vicky belong to the decorators’ team, if anyone asks, she leaves to carry on with her work. Vedanth who is walking to the hall, spots Manjunath being harassed by the organiser to pay the full money. Upon seeing Parimala, the organiser calls her to them and insults Manjunath for making this wedding possible only after borrowing money from people.

Will Vedanth help the Manjunaths? What will Amulya say to this? Stay tuned for tomorrow’s update to find out.

Watch the latest Kannada movies on ZEE5, if you want to keep the entertainment going smooth.

Tabla Nani In Chemistry Of Kariyappa Has Done A Fabulous Job As A Middle Class Man Kariyappa. Find Out His Story By Clicking Here On ZEE5