Vijay Raghavendra talks about his experience on the sets of Malgudi Days; Adya and Sarthak talk about Vedanth's feelings for Amulya. 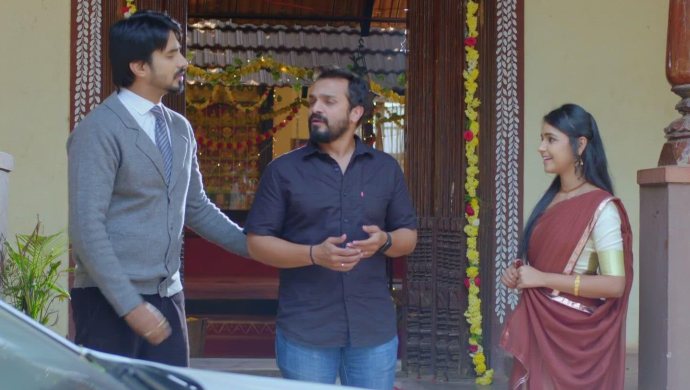 In the previous episode of Gattimela, Vedanth and Amulya run away from the rowdies that are chasing her. The two get into an auto where they begin to fight with each other again. He drops her off at her house. At night, Vedanth finds the cup that Amulya was using to drink coffee in. He had hidden it in his bag because Sarthak and Vikranth had arrived, just then. Vedanth begins to think of Amulya once again and smiles to himself, after which, the two talk on the phone.

In the next episode, Vedanth brings Vijay Raghavendra home as a result of Amulya telling him that she is a big fan of him. They all welcome him to their house but are star-struck as ever. They all tell him that they still cannot believe that he has come to their house. He tells all the members of the Manjunath family that Vedanth and he have been friends for many years. He adds that when Vedanth called him the previous night to come to their house, Vijay could not say no. He also shares the experience that he had on the sets of Malgudi Days to say that his character is that of an old man. This required around 4-5 hours of makeup everyday. However, he also says that shooting for the film was of a lot of fun. Vedanth is sitting outside and daydreaming. Vijay says that for someone who could not stand the sight of girls has fallen for a girl. Vedanth tries to deny it.

Adya and Sarthak are driving somewhere but are talking about Amulya and Vedanth. Sarthak tells her that Vedanth does have feelings for Amulya and it is love that he feels for her but he has not come to realise the same. He also tells Adya that he has not been with women before he met Amulya so he does not know how it feels to be in love. He also says that slowly but surely, Vedanth will realise his love for her. Adya and Sarthak also share a cute romantic moment.

Sa Re Ga Ma Pa Is Back With More Auditions And Tough Competition!