Tonight on Gattimela, Vedanth not only saves Amulya from being harassed by miscreants but also makes her and Adithi slap them hard across the face! 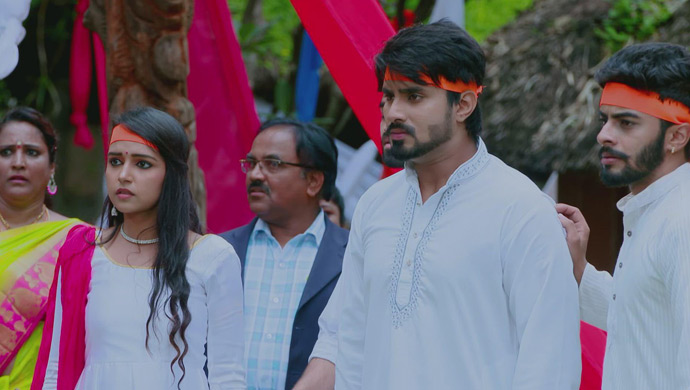 In the previous episode of Gattimela, Vedanth is shocked that Amulya actually said sorry for dashing into him. When nasty insults are hurled at Aarthi and Pari by Suhasini’s friends, Vedanth comes in their defence. Elsewhere, Amulya discusses her plan of making Vedanth agree to get married; by getting him drunk. Shortly afterwards, some local boys mess with Adithi in an insulting manner. Vedanth, who finds out about this, gets angry and teaches them a good lesson. In the end, Amulya is embarrassed when Aadya points on multiple occasions that she has started copying Vedanth’s behavioural patterns.

On tonight’s episode, Vicky curses the maintenance people for leaving so much of water outside the bathroom as he is waiting for Aarthi. However, a few moments later he thanks the maintenance team in his mind as Aarthi slips outside the bathroom and falls into his arms. While they share a romantic moment, Vedanth elsewhere gets furious to see some guy touching Amulya from behind on purpose.

Annoyed, Vedanth goes and blocks the space between Ammu and the man. Shocked that Vedanth is actually trying to protect her, Amulya feels awkward by his presence and walks away with Anju. Vedanth uses this opportunity to warn the man and his friends to leave and not come back to the area again, or the consequences will be severe. Meanwhile, the priest informs Manjunath-Pari and Sridhar-Suhasini that since there is time for the Ganesha Visarjan, they can sit somewhere and fix the nischithaartha dates.

While everyone is excited to listen to this, Suhasini, in a soliloquy, promises Pari that their children will never get married. She then signals something to Sarika, who is thrilled to begin the next phase of their plan. Elsewhere, Sarthak-Aadya, Vicky-Aarthi and Amulya-Adithi-Anju dance to the celebrate the occasion. Vedanth, who watches everyone from a distance, is soon irate to see the same man he had warned before back.

To top it, the man purposefully tries dancing with Ammu, causing Vedanth to intervene. This is when Sarthak and Vicky stop what they are doing and ask Vedanth what’s wrong. At the Vashishta house, Parimala and Manjunath are soon shocked when the priest, who examines both the astrological charts, informs them that it is against his values to get someone as dysfunctional as Aarthi and Vicky married (because of their age difference).

At the ground, Vedanth gives an idea of the seriousness of the situation to Sarthak and Vicky before looking at Adithi and announcing that whoever faced the trouble will be the one to take revenge. Amulya is soon shocked to find out that the boys tried something funny with her sister Adithi too. A few moments later, everyone is stunned when Vedanth himself calls out to Amulya as ‘Rowdy Baby’ and asks her to beat the men to her heart’s content.

Not only does she slap the man twice, hard across the face, Ammu even makes Adithi do the same. Back at Suhasini’s home, she gets angry when the priest, who takes pity on Pari’s love for Aarthi, agrees to do something to fix the wedding.

Will Suhasini be able to stop Aarthi-Vicky’s wedding? What is her real plan? Stay tuned to tomorrow’s episode to find out.

Watch Ramesh Aravind In The Family-Drama Hendtheer Darbar, Streaming For Free On Your ZEE5

Birthday Special: 12 'Monday Motivation With Ramesh' Lessons That Will Inspire You