On tonight's episode, Vedanth helps Amulya when soap gets into her eye and also helps start her Rani. Later, because of him she unfortunately faints! 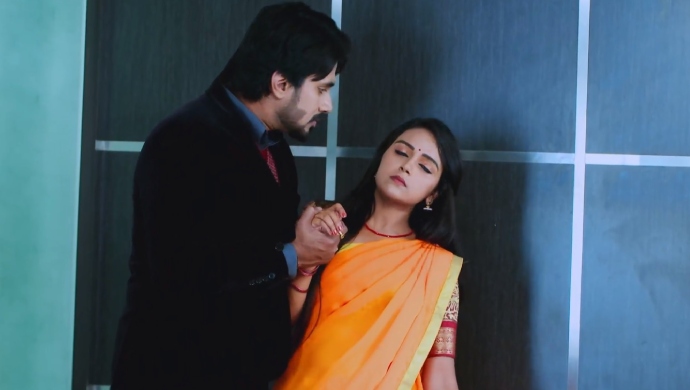 In the previous episode of Gattimela, when Vedanth scolds Ammu despite many efforts from her to show gratitude, Amulya decides to become her other self, the one who is stalking him. The next day, she is shocked to hear that Parimala invited Vicky and Vedanth to attend the Ayuddha Pooja at home. Later, as Amulya is washing the vessels to help out during the pooja, she asks for Adithi’s help to make her drink coffee but Vedanth steps up and offers her the coffee.

On tonight’s episode, just as Vedanth enters the gate of the Manjunath house, he is amused to see Adithi and Amulya fighting about the glass of coffee the former made for the latter. Vedanth watched as Amulya butters up Adithi so after she goes back into the house, to make her drink the coffee as her hands are filled with soap. Soon, as if by reflex, Vedanth moves forward towards her and finds his hands automatically going towards the glass of coffee to feed Amulya, who is unaware of his presence.

As soon as he is about to make her drink, she looks up and is stunned to see Vedanth there. Upon enquiring why he is here as she is explaining that her headache is gone she accidentally gets soap into her eyes and starts screaming about the eye-burn. Vedanth, who tries to call Adithi or Anjali for help, realises that he himself will have to help her as no one responds. He screams at her to stop jumping around when she asks him only to provide help.

With much reluctance, Vedanth holds her face and tries to blow into her eyes to get the soap residue out. As he is helping her out too he scolds Amulya and then continues blowing into her eyes to reduce the burn. Soon, Sarthak tells Vicky that after love marriage the love stops as the wives push them away when it comes to romance. As Aarthi is watching this, Aadya comes out and tells Vicky not to listen to her husband as he is lying.

The Ayuddha Pooja begins as Pari asks God to help her in her business so that she can get all her four daughters married in this year itself. To this Amulya snaps at her mother and asks her not to have some high dreams. Then, the pooja for Amulya’s bike Rani and Anjali’s cycle begins. As Vicky performs the pooja, Amulya is then asked to start her bike and take it over two lemons to ward off the evil eye.

While Anjali makes her cycle move over the lemons successfully, Ammu has a starting problem. As her loved ones stand and watch humorously at her efforts, Amulya struggles to get the bike to start and she makes endless efforts to please Rani. However, when all the efforts fail, Pari invites everyone at home to eat first before trying to make Rani work again. As Amulya is entering the house, she hears her Rani switch on and looks stunned at Vedanth, who is sitting on it.

In disbelief, she runs over to Rani and demands for an explanation as to why she started at the hands of Vedanth when she made so many attempts herself. As Vedanth explains why Rani started, Ammu is startled when he uses her own line against her and says, “Ee Vedanth Andre Tamasha Na?”. Just then their siblings come out of the house and give big claps to both of them who feel awkward and embarrassed really fast.

As Amulya is looking at Aadya, she suddenly remembers her words during the Ganesha party that if we start to like someone we follow their behaviour and implement it in our own lives. Aadya winks to her and is all smiles as Amulya and Vedanth look at each other uncomfortably. Later, Vicky enquires about Vedanth’s sudden disappearance during lunch to Sarthak and learns that the meeting was planned but since the client couldn’t make it, a video conference was decided between them, hence he had to leave.

Amulya makes a mocking comment on her boss just as Sarthak finds out that Amulya and Vicky are together planning to convince Vedanth to fall in love by pretending to be his stalker. Sarthak immediately tells both of them not to involve him in any of these charades as he just escaped from Vedanth’s clutches while dressed as a woman the other day. At the office, as Vedanth is discussing the stalker with Kantha, he accidentally throws his stress ball towards the door just as Amulya is entering.

The ball hits her and she faints in Vedanth’s arms, who reaches her just in time.

Is Amulya okay? Was the stress ball so heavy or what it just a prank? Stay tuned to find out from tomorrow’s episode.

Aarthi Manjunath To Paaru: 8 Actresses Who Have Nailed The ‘Festive’…

Zee Kannada Kutumba Awards 2019: Cast Your Vote For Your Favourite Shows And…

Zee Kannada Kutumba Awards 2019: Cast Your Vote For Your Favourite Shows And Stars

Gattimela 11 October 2019 Preview: Amulya Gets Vedanth Extremely Worried About Her