The evening of Vikranth and Aarthi's sangeet, Suhasini makes an announcement of the engagement of Sahithya and Vedanth 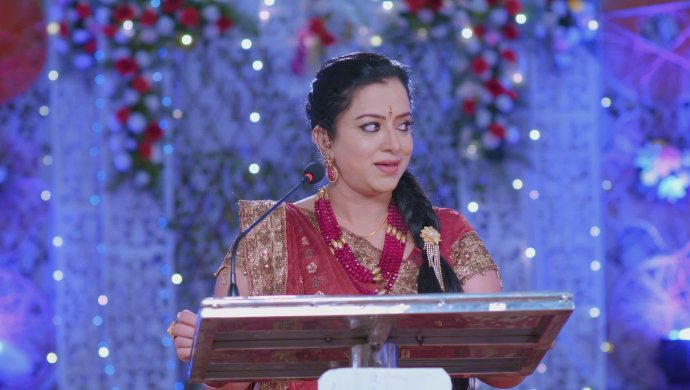 In the previous episode of Gattimela, the functions have started to take place at Amulya’s house. Everyone in the family begins to apply turmeric on Aarthi while at home Vedanth and Vikranth are playing video games. Vikranth tells Vedanth that if he wins the game then he will have to do whatever he says if he wins the game. Both families pack all the clothes and jewellery that they will need during the marriage. They all have a light moment too. The next day, Aarthi’s sisters and their family are waiting for the groom’s side to come.

The groom’s family including Vedanth and Vikranth is welcomed by Amulya who puts a garland around them. Both the sides have a light moment while Suhasini looks unhappy. Amulya and Vedanth too have a moment while looking at each other. Sahithya notices this and tries to grab his attention. However, Vedanth reminds her of her deal. Vikranth, then, takes Vedanth to aside and tells him that he has 2 requests. One is that the car in which Vikranth and Aarthi will go in and their bedroom must not be decorated and must remain the same. Vedanth tells him not to have such mindless conversations with him.

Later, Suhasini insults Aarthi’s parents about their financial status again. The two get worried about how their daughter will survive in that house if Suhasini keeps trying to put them down. They also decide to give a part of the money that is spent on the wedding to the Vasishta family. On the other hand, Sahithya complains to Suhasini about Vedanth not giving her much attention. She also mentions the fact that Vedanth is always running behind Amulya instead of giving her any attention. Suhansini tells her to have some patience as she has a plan in mind.

The evening, the sangeet takes place. Before that, Vedanth calls Vikranth and Aarthi on stage and wishes his brother all the luck in the world. The two have a sentimental moment on stage and welcomes Aarthi to the family. The whole family is called on stage. Just then Suhasini makes an announcement of the engagement of Sahithya and Vedanth that same evening.

Prakash Belwadi Shares His Experience Of Working With Ramesh Aravind, Big B,…