In this episode, Anjali spots Aarthi and Vicky at the temple. Meanwhile, Amulya is relieved that Vedanth failed to prove that Gautham is a fraud. 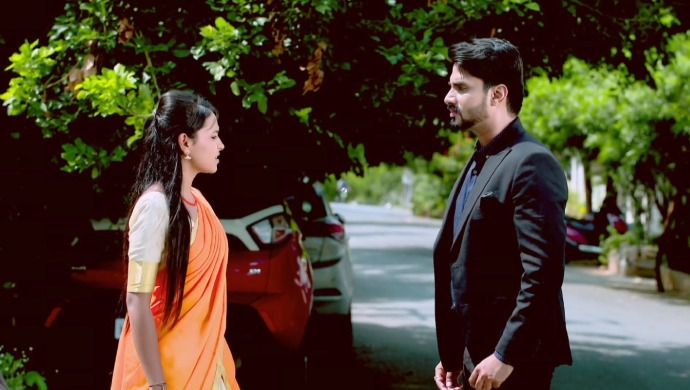 In the previous episode of Gattimela, Gautham taunts Vedanth on his loss and confesses his true nature. At night, Vedanth is surprised to receive a call from Amulya, claiming she is ready to listen to what he has to say. He then clarifies if she is pranking him. Elsewhere, Gautham and Sarika meet and the former reveals to the latter his entire plan. Kantha accidentally gives Vedanth an idea at the office to find out the truth about the woman he saw with Gautham. Vedanth then tells Amulya everything. She later agrees to go with him to dig deeper into the matter.

On tonight’s episode, Vedanth is impressed by a mechanic’s skill and asks him to enter a mechanic contest by Castrol. At the temple, Vicky realises that Aarthi is worried about if anyone will see them and throws a taunt her way. On their ‘date’, Vicky explains to her how he wants to spend another lifetime with her. They then spend some romantic time looking into each other’s eyes. Elsewhere, while Amulya and Vedanth head to the given address, Gautham goes to his home where he and his ‘wife’ live. His wife is delighted to see him as a determined Vedanth storms in the direction of the house is. All this time, Amulya prays to her bajarangi that what Vedanth is saying should be false.

Gautham gets romantic towards his wife, while Vedanth and Amulya land up at the wrong door. Amulya is relieved but Vedanth tries to ask the old man at the door about Gautham but in vain. Annoyed, Amulya walks away to the far and Vedanth follows suit. At the temple, Anju is shocked to see Aarthi and Vicky staring into each other’s eyes. Soon, he gets up to leave when Aarthi notices something wrong with his leg. Despite his excuses, Aarthi is shocked to learn that he met with a small accident on the way to meet her. After waving goodbye to him, when she turns, she is taken aback to see an angry Anjali standing in front of her. Anju then screams at her eldest sister for disappointing her and promises to tell Parimala everything.

Elsewhere, Vedanth stops Amulya and asks her to give him some more time because he is sure that Gautham is a fraud. As Amulya is talking about her stress regarding Aarthi’s marriage, she receives an alarming call from her, that Anju knows everything. At the Manjunath house, Adithi returns home and somehow convinces Parimala to make something special for her, when Amulya calls her up to give her the shocking news. Luckily, before she can tell their mother anything, Adithi forces Anju to the other side and asks her to shout shouting. Meanwhile, Vedanth is startled when Amulya suddenly asks him to stop the car and informs him that no one at her home knows about her working in his office. In the end, Vedanth gets a taunting message from Gautham and shows it to Amulya, who is shell-shocked.

Will Amulya believe Vedanth now? What is the next step Gautham will take? Stay tuned to find out.

Gattimela 11 June 2019 Preview: Will Anjali Reveal The Truth About Aarthi To Manjunath?