On tonight's episode, Vedanth promises to do everything in his power to expose Gautham. Parimala is thrilled when Amulya brings Aadya and Sarthak! 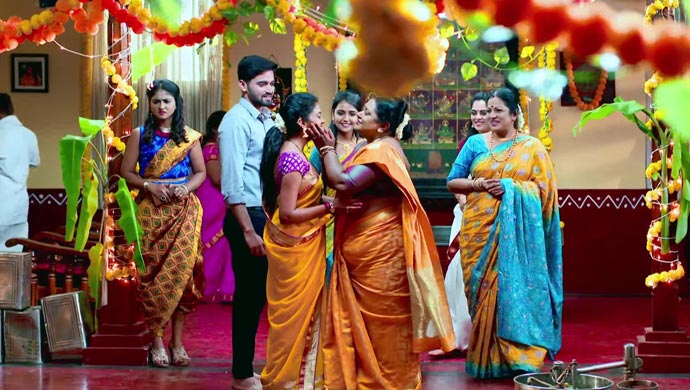 In the previous episode of Gattimela, Vedanth pays a visit to Sharada’s house by posing as an electrician to gather proof against Gautham. After gathering what he came for, Vedanth demands that Vicky and Amulya come there immediately. Unfortunately for him, the proof goes missing from his phone. He then begs both of them to follow him to the house but fails to convince them. Elsewhere, the countdown to Aarthi’s wedding begins with preparations in full spring. However, Parimala is disheartened when she learns that Aadya couldn’t make it. In the end, Vicky and Amulya get annoyed with Vedanth, who is out to prove something that isn’t and go away.

On tonight’s episode, Gautham blocks Vedanth’s car with his bike, much to the latter’s annoyance. After talking to Vedanth in a taunting manner for a while, Gautham then introduces to him the fake-couple he had placed in his house as famous actors whom he hired to cover up in his place. After paying the actors, Gautham comes to the point that he is actually in the profession of trapping women on the pretext of love, marrying them and then later selling them. Vedanth, who is baffled at what he hears grabs hold of Gautham’s collar and asks for an explanation.

Elsewhere, at the Manjunath house, Parimala sits glumly because Aadya and Sarthak aren’t able to make it for Aarthi’s function. While Padma and Aarthi console Parimala that it will be fine, Sarika rejoices from within about the fact that she could ruin the Manjunaths’ happiness even if it is for a second. Just then, Amulya walks in with Aadya and Sarthak causing everyone to be ecstatic. Sarthak then informs Parimala that it was because of Amulya’s perseverance that they could make it, much to Sarika’s chagrin. Back at the place where Vedanth and Gautham are, the latter tells the former he will surely marry Aarthi and keep her with him till he has no use of her and then if need be he will sell her.

He further adds that Vedanth can’t do anything about it even if he wants to because he has no proof. Gautham then explains how he got rid of the videos from Vedanth phone, much to the latter’s astonishment. Before leaving Vedanth promises that now he will do anything in his power to stop this wedding and he will be more vigilant than ever. At home, Aarthi is treated with turmeric in the Arishina-Shastra (Haldi-ceremony in North India). Then a lady asks Amulya to take care of the auspicious plant till the end of the wedding and to place it in the pooja room. Amulya prays to God that Aarthi should marry the man that she loves. At the Vashishta house, Vicky accuses Vedanth of trying to spoil his marriage and asks him not to interfere anymore.

Soon, everyone gets ready to leave the Manjunath house to go and meet the groom’s family. This makes Parimala become emotional. While Manjunath consoles Parimala Aarthi spots a car with her and Gautham’s photo on it. Just then, Amulya gets a call from Gautham stating that he has sent a car for them to come to the venue in it.

What is Gautham’s plan exactly? Will Vedanth be able to stop Aarthi’s wedding to Gautham. Stay tuned to the next update to find out.

Watch the latest episodes of all your Zee Kannada shows, streaming for free on the ZEE5 platform.

If You Like Horror-Genre Content, Watch The Latest Episodes Of Hit Horror Show On Zee Kannada, Aatma Bandhana, Streaming For Free On Your ZEE5 Platform