On tonight's episode, Vedanth tries his best on many occassions to tell Amulya not to get married to anyone but she is after all namma 'Rowdy Baby'! 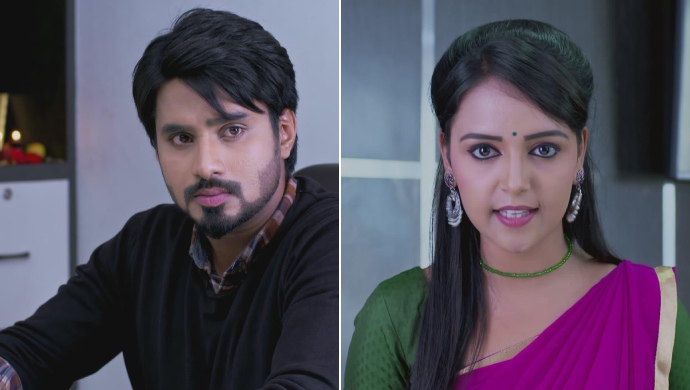 In the previous episode of Gattimela, just as the Manjunaths are wondering if Ammu is okay with the proposal, Tarini arrives at their house. Elsewhere, Vedanth is in denial about the fact that there might be a prospective proposal for Amulya. Soon, Ammu gives Tarini four conditions before she accepts Siddharth’s hand in marriage. Everyone is stunned when Tarini happily accepts. Later, Vedanth musters the courage and words to tell Amulya not to get married leaving her stunned.

On tonight’s episode, Vedanth probes into why Amulya was late. When Ammu asks why he wants to know, Vedanth changes the topic and brings in office work to complain about. However, soon he comes back to the point and tells her not to agree to this wedding. While Ammu stands shocked, elsewhere Suhasini worries if what Sarika said about and Vedanth-Amulya could perhaps be true.

To add to her peril, Paramananda keeps talking about what will actually happen if Vedanth and Amulya get together soon. At the office, Amulya gets irritated with Vedanth for trying to stop her wedding even though they are neither friends nor in a relationship. When he tries to dominate her using the ‘boss’ card, Ammu brings him back to earth and makes it clear that she will do what she wants to do because after all, he is just a boss.

Meanwhile, a worried Aarthi vents out her feelings to Vicky about Amulya agreeing to this wedding with her conditions. To this, Vicky tries to coax her into calming down and cheers her up. Soon, Vedanth arrives at the spot Vicky is at and gets hassled to know that his brother was talking to Aarthi about Ammu’s wedding.

At the Manjunath house, Amulya’s sisters corner her and fight with her for accepting a proposal even before seeing the boy just for her family’s sake. To this, Amulya manages to convince them that for her, her sisters and parents matter the most. The four Manjunath sisters then share emotional moments with each other.

Elsewhere, Aadya is excited when Sarthak comes back home from work and asks about Vedanth since she didn’t get to meet him after he was released from jail. Just then Padma and Ashwath come there and learn that the groom’s family is coming to meet Amulya the next day. While Aadya wonders what happened to the chemistry and sparks she saw flying between Vedanth and Amulya, he, at his home, recollects all the recent moments when she was nice to him.

Suddenly, he snaps out of his dream and gets upset that Amulya didn’t take his advice and is still planning to get married. He calls her for the same and startled when she recognises his voice immediately.

How will Vedanth convince Amulya not to get married? You’ll know only when you stay tuned to tomorrow’s episode.

Watch the latest episodes of Radha Kalyana, streaming here on your ZEE5.