In the next episode, while Suhasini makes a foolproof to emotionally trap Vedanth, Amulya treats him very nicely for a change, much to his surprise! 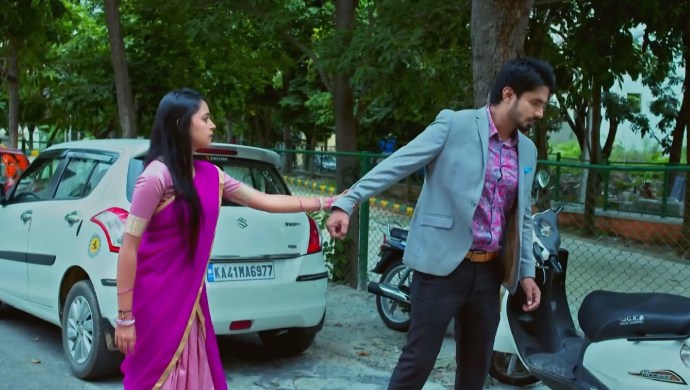 In the previous episode of Gattimela, Amulya dreams about Vedanth smiling wide at her but soon shrugs off the feeling when the real Vedanth yells at her and storms away. Just as Vicky is about to propose, Aarthi starts crying and worries about her parents no being there. When Amulya puts some sense into her, Vicky decides not to go against her wishes. But when Aarthi sees Vicky keeping a photo of Pari and Manjunath in his wallet she puts the ring on his finger without thinking about it. While Aarthi and Vicky get engaged, Suhasini welcomes Sarika into her family by completing some ritual that a mother-in-law has to do with her future daughter-in-law.

In the next episode, Suhasini assures Sarika and Paramananda that if she speaks confidently to Vedanth that she wants the latter as her daughter-in-law, her son won’t oppose it. Unknown to them, Sridhar stands at a hiding distance is shocked to hear this. Elsewhere, Vedanth informs Amulya that Aarthi-Vicky won’t show up for another half an hour so he will wait in the car.

But as soon as he turns, Amulya holds his hand and tells him that she is not doing it by mistake. Furthermore, she softly tells him that she won’t show disgust as she did before. A stunned Vedanth, who is rooted to his spot, watches as she puts her other hand in his hand.

Is this her way of thanking him? What is Vedanth’s response to this going to be? We’ll find out from tomorrow’s episode, stay tuned.

Watch All The Episodes Of The ZEE5 Original Series Final Call, Now Streaming In Kannada

Karnataka Rajyothsava 2019: 6 Facts You Should Know About The 'Karnataka Formation Day'