In this episode, Suhasini is furious to know that Vedanth had gone to the Manjunath house. Meanwhile, Pari and the girls have an emotional reunion! 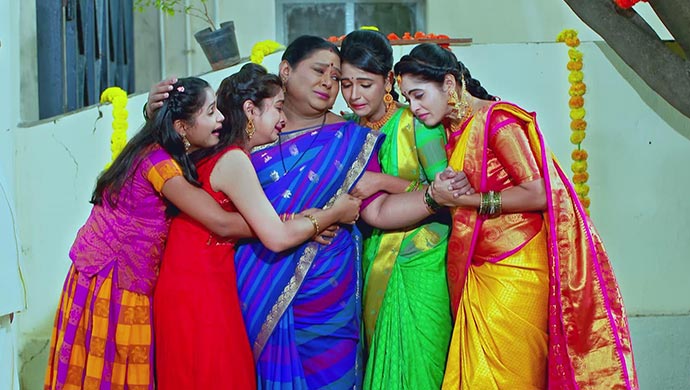 In the previous episode of Gattimela, the Vashishta brothers return home and realise that Suhasini is more furious than ever. Vicky doesn’t care much for his mother’s emotions while Vedanth apologises to her. He then promises that he won’t ever do anything without her consent again. Meanwhile, as the Manjunath sisters are crying about their parents, Vedanth calls Amulya to check up on her and ask about Pari’s health. Afterwards, Adithi is surprised to find Vedanth waiting outside their gate. He startles her further by not only giving warm blankets for all of them but also standing guard outside their gate till morning. In the end, Adithi realises that he is not the man she thought he was.

On tonight’s episode, an infuriated Sarika sits frustrated in her room when her father appears there with tea. When she throws away the cup of tea, her father gets worried. She is soon thrilled to know that her father will speak to Suhasini about her and Vicky’s wedding. At the Vashishta house, Suhasini paces up and down in wait when Vicky passes from there. Upon asking where he is headed to, Vicky insults his mother. Vedanth, who arrives there just then, screams at Vicky for talking to Suhasini like that. Vedanth is then asked about where he was, causing him to stunned for a moment. Elsewhere, Anju gets really hungry and asks if anyone has money to get something to eat. Adithi screams at her for creating such a ruckus without worrying about what is exactly happening. Just as Amulya is getting up to go and bring something for her sisters, they all see Parimala and Manjunath returning home.

They are about to approach her with tears in her eyes but looking at Manjunath, they stop. That’s when Parimala herself calls them for a loving embrace. Like a fish without water, the girls run and apologetically embrace Parimala. Suhasini, on the other hand, repeats her question to Vedanth, who is lost in thought. When she tells him that he has promised not to lie, he reveals that he was outside the Manjunath house. Upon learning the whole truth, Vedanth’s father and brother are proud of him while Suhasini grunts in disgust that just when she had thought of a plan to control her younger one, her older son is getting out of hand. Back at the Manjunath house, Parimala scolds her girls for not taking the key from Manjunath, much to their astonishment.

To avoid getting her father the bad name, Aarthi takes the blame on herself for not taking the house key. Soon, the ladies from the neighbouring houses come to do a pooja for Parimala as she has returned from near death. Then, she takes her girls into the house and asks everyone to wait a while. Aarthi, Amulya, Adithi and Anjali are surprised when Pari comes out with a tray of glasses. With tears in her eyes, Parimala confesses that none of the four would have had a drop of water to drink till now. Saying this, she asks them to drink. Shortly afterwards, she questions Manjunath about why he is so quiet and asks him to tell her about his opinion about their daughters. When he says that they are dead to him, Parimala stands heart-broken. She then defends her daughters righteously but Manjunath walks away in a huff.

Elsewhere, Vicky goes to Vedanth and tells him about the plan Paramananda and Suhasini have to take this proposal forward. Upon hearing that they want Aarthi and Parimala to touch their feet, apologise and then take this proposal forward, Vedanth is shocked. Suhasini, who is standing outside thinks of herself happily that since Aarthi and Parimala will not touch her feet, this marriage won’t take place at all.

Will Suhasini’s dream come true? What is Vedanth’s plan of action now? Stay tuned to the next update to find out.

Aindrita Ray Has Done A Fabulous Job Opposite The Navarasa Nayaka Jaggesh In The Comedy Drama Melkote Manja. Click Here To Stream The Film On Your ZEE5

Subbalakshmi Samsara Weekly Recap Of 25-31 July 2019: Has Guru Turned Over A New Leaf?