Kanta catches Vedanth staring at Amulya who is showing her Tik Tok videos to the other employees. 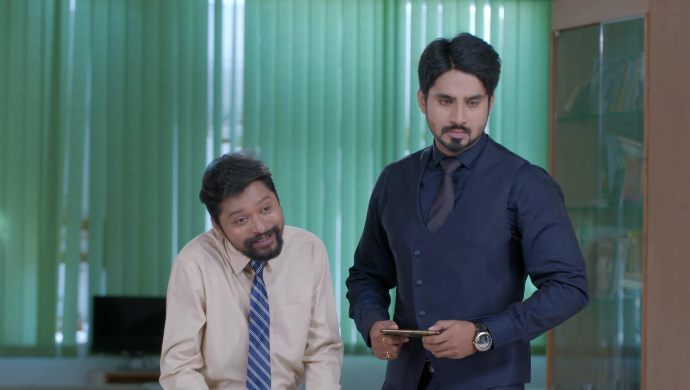 In the previous episode of Gattimela, Suhasini tells Aarthi to sign a document which states that if in any case Vikranth and her take a decision to separate or get divorced, then Aarthi will have no right to ask for any sort of financial support from Vikranth. Meanwhile, at the office, Kanta asks Vedanth how he came so early to the office when Vikranth and Aarthi have just gotten married. He also tells Vedanth that no one has come to the office as yet with the intention of saying that Amulya too hasn’t done the same.

In this episode, Amulya is showing off her Tik Tok videos to everyone in the office. Vedanth is standing and staring at Amulya while admiring her. He suddenly remembers Sarthak telling him that if he smiles while looking at the girl that he is in love with, then it is a fact that he is in love with her. Kanta, meanwhile, is staring at Vedanth and wondering how he can be so lost in Amulya’s thoughts as she notices Vedanth smiling to himself. Vedanth, on the other hand, imagines Kanta as Lord Krishna hovering next to Amulya. He is surprised to discover his imagination going wild. Kanta makes a light moment out of the fact that Vedanth has fallen for Amulya and has become so weak. Vedanth wonders what has really happened to him and why he is acting so awkwardly. He also asks Kanta about Amulya sharing a video with a stranger to which Kanta replies saying that Amulya will have to give permission for them to make a video with someone else.

Meanwhile, at home, Pari calls Aarthi to ask her how she is. Aarthi, who has just signed the prenuptial agreement, tells her that she is doing very well and that everyone is taking care of her. Aarthi complains about how she has no work to do the way she had before her marriage as there is enough house help to do the work. They have an emotional moment when Aarthi tells her that she feels like coming back to her house and will come to meet them soon.