Ajji overhears the conversation about Sahithya wanting to get closer to Vedanth; She talks to Suhasini about the same. 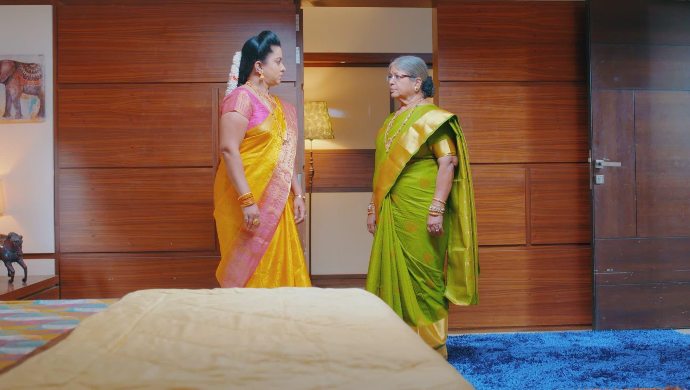 In the previous episode of Gattimela, Parimala gets emotional about daughter getting married. Just as they are all talking, two women begin to discuss Aarthi’s marriage, wondering if she will actually tie the knot this time. Amulya hears the same and tells them that they are welcome for the occasion. However, if they have anything else in their heart then they are most welcome to leave their house. Elsewhere, rituals are being performed in the Vasishta house.

Suhasini tells Vedanth to take Sahithya out to dinner. However, Ajji says that Vedanth must go to Amulya’s house to give the turmeric as it is part of the ritual and doesn’t allow Vedanth to go out with her. Vedanth half-heartedly apologises to Sahithya and leaves with Sarthak. When Sahithya asks if it is necessary to cancel dinner plans, Ajji tells her she can still go for dinner but Vedanth will surely not be joining her.

At Amulya’s house, Manju and Pari are stunned to see Aarthi who looks beautiful in the yellow saree. They are all complimenting her when Sarthak comes into the house. He apologises for being late for the ritual. Pari asks him why he is late and where the turmeric is, telling him that it is a ritual to apply turmeric powder that is sent from the groom’s side. As she tells Sarthak this, Vedanth comes in with the turmeric. They all indulge in a light conversation.

Later that day, Sahithya and Suhasini, on the other hand, are thinking of ways to get Vedanth to spend more time with Sahithya. Ajji overhears this conversation and tells Suhasini that the more she tries to control her children, the farther they will go from her.

Meanwhile, Amulya is grinding the turmeric for Aarthi’s haldi ceremony. When Vedanth takes it to the kitchen to give it to her, she asks him why he brought it so late. As she is complaining about how much time it will take to grind the turmeric, Vedanth begins to stare at the turmeric on her face. He tells her to clean it away but Amulya ends up rubbing more powder on her face. The two have a romantic moment when Vedanth and her begin to chase each other to put turmeric on the other.

Gattimela: Do You Think Druva And Vedanth Should Confront Each Other?