Amulya is missing Vedanth at the office which Sarthak finds out; Vikranth and Aarthi have found a date for their wedding 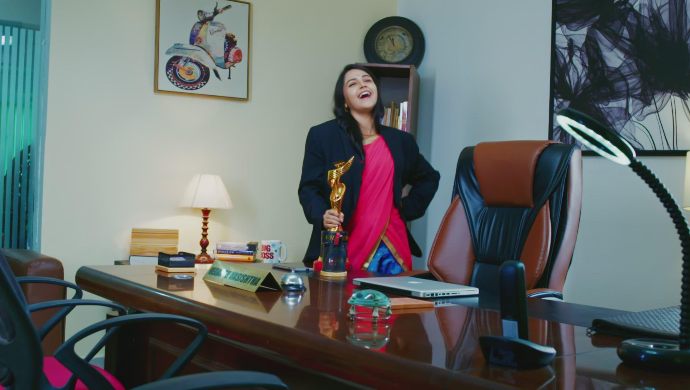 In the earlier episode of Gattimela, Amulya is walking back home and can only think of Vedanth and his moments with him. On her way her back home, she decides to drink tender coconut water. She begins to tell the coconut water man that Vedanth should not have left her alone and gone so far. At home, Vikranth tells his mother that he is very happy today. He tells her about the day he had with Aarthi and how he helped her get all the things that are required for the ritual that will be performed at her house.

In this episode, Amulya comes into Vedanth’s cabin when he is not there. She is reminiscing the moments she has had with him. Although she is alone in the room, she is talking to herself and imitating Vedanth. While talking to the chair, she asks herself why she is missing him so much. But she has no answers. At one point, she also imagines him to be sitting on his chair and staring at her. Amulya asks him how come he is here but soon realises that she is just imagining him to be there.

She also wears his blazer and begins to dance in it. Just then, Sarthak and Kanta walk in. When they ask her what she is doing, she tries to make excuses. Kanta says that she is in love with Vedanth which is why she was dancing around in his blazer. Meanwhile, at home, everyone is getting ready to perform the ritual. Vikranth and his family have just arrived at Amulya’s house and the two families are having a conversation and the date for Vikranth and Aarthi’s wedding has been fixed. They, later, video call Vedanth to tell him that they are missing him.

At the office, Amulya is thinking of the last time she met him where he dropped her to the car. When Sarthak comes, she thinks it’s Vedanth. She tells him that she is stressed about work. Sarthak asks her not to lie to him and asks her if she is missing Vedanth. Later that day, Vedanth wonders why Amulya has not called him to ask him about his whereabouts. Amulya, too, is wondering why he hasn’t called her since he has left.

EXCLUSIVE: Mokshitha Pai Of Paaru: It Was Challenging To Play The Role Of A…