Suhasini tells Sarika that she will not allow Vicky and Aarthi to get married. She adds that she has a plan in mind. 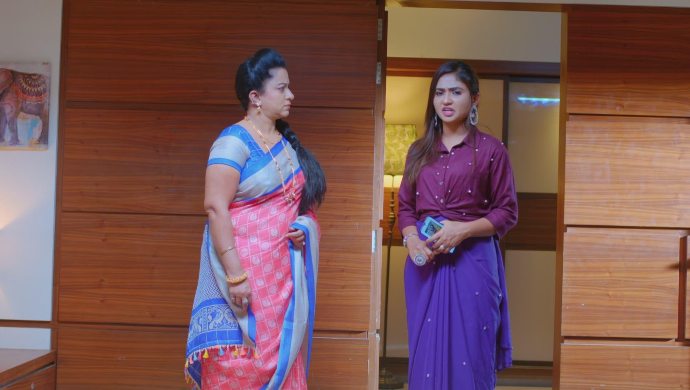 In the previous episode of Gattimela, Vedanth tells his brother that he should not have come back to Bangalore. Although he does not have the right to question anyone about where they want to stay, he says that Druva has no right to come close to his family and must stay away from Adya and Vikranth. Meanwhile, at home, Aarthi’s mother is shouting at her for meeting Vikranth a day before the wedding.

Amulya tells Vedanth that she joined his gym because he called her a broomstick to which he begins to laugh and asks her why it makes a difference to her if he calls her the same. He tells her that he was not serious and that she is fine the way she is and does not need to work out. As he starts laughing, Amulya begins to notice his smile and thinks about how good-looking he is. She also feels immense love for him when he smiles at her.

At home, Suhasini brings Sarika into the room and shouts at her. She asks her why she is revealing to the family that Suhasini is helping Sahithya. Sarika tells her that Aarthi and Vikranth are about to get married and it doesn’t seem like she will be able to stop it. Sarika tells her that she feels like she is the most unhappy person on earth. Suhasini tells Sarika that she will make sure that Vikranth and Aarthi will not get married. Sarika doesn’t believe anything she says when Suhasini tells her that she has a plan which Sarika will have to execute.

Elsewhere, Vedanth drops Amulya back home. Before she leaves, the two share a moment as they get lost into each other’s eyes. He also tells her to go inside her house as she looks very nice and that someone might just kidnap her. Amulya is surprised that he complimented her. Vedanth gets into the car while smiling to himself and gets conscious about the same.

If You Are An Elder Sibling, Here's Why You Can Relate To Gattimela's Aarthi