When Amulya is about to sit down for breakfast, Sahithya tells her not to sit there as it is Vedanth's spot. 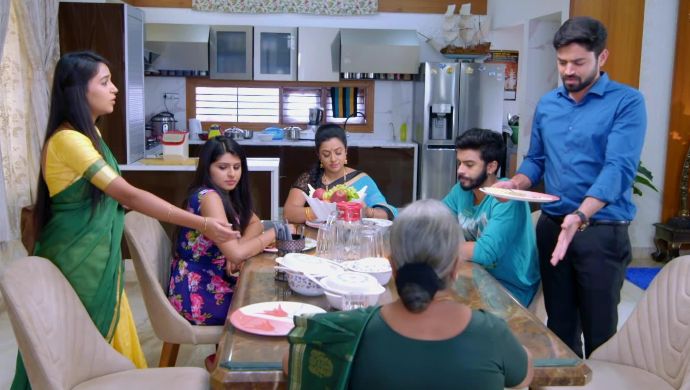 In the previous episode of Gattimela, Amulya, instead of being honest with Vedanth about her feelings, tells him that he is like family to her and loves him in a friendly manner. She then thinks to herself that if she accepts her love for him, she might end up losing her relationship with him. At home, Anju and Adithi converse about how much they miss Aarthi.

In this episode, Ajji asks Amulya, who is still at Vedanth’s house, to join them for breakfast. As she goes to sit, Sahithya tells her to sit elsewhere as that is Vedanth’s spot. Suhasini, referring to Amulya and Aarthi, thinks to herself that time has come where she has to sit with people lower than her status. She begins to talk to Sahithya about her brother who is in Dubai along with details about her father’s business. Vikranth thinks to himself that she too should have been in Dubai instead of causing all sorts of problems in their family. As they are speaking, Vedanth comes for breakfast. Instead of sitting next to Sahithya, he takes the chair and places it next to Amulya.

Meanwhile, at home, Druva feels extremely disappointed with the fact that Pari has sold all her vessels and discontinued her business. While he doesn’t have the financial bandwidth to do so, he thinks of ways in which he can help the family. Just then, Amulya comes in and asks Pari how she decided to sell everything without asking or telling her even once.

Later that day, Amulya thinks of all the moments she shared with Vedanth the previous day. She begins thinking about the way he ate all those chillies and the fact that he asked her if she likes him. Adithi comes in just then and Amulya asks her when she came back. Adithi, being her crazy self, tells her that she is going to become a national level start on TikTok. Amulya tells her to go and study instead of irritating her.

3 Easy Dishes To Make During This 21-Day Lockdown! Take A Look.