Vikranth takes Aarthi to the temple; she prays that they stay together forever; Amulya and Vedanth stand up against bullies 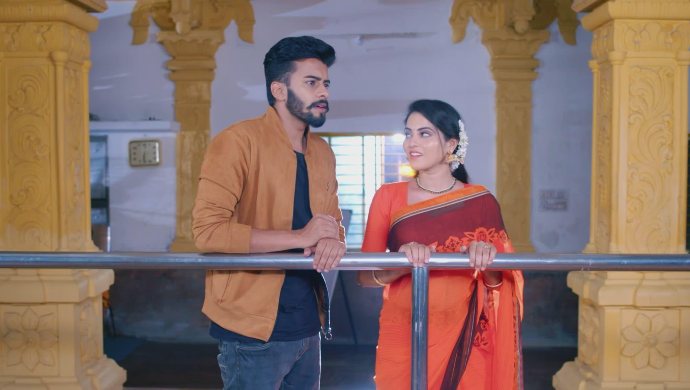 In the previous episode of Gattimela, Adya video-calls Aarthi and asks her if they are all prepared for the ritual to be performed the next day. She also tells them that they are lucky because the four sisters can work together and have fun while making all the arrangements for the ritual. The next day, Amulya goes to the gym again. As she is working out, two men try to misbehave with her.

Druva is waiting for Amulya to finish her workout at the gym. Just then, a girl comes up to him and asks him to drop her at a certain location. She also says that she will give him extra money for the ride. Druva tells her that he will drop her off wherever she wants, but she mustn’t give him more than the usual fare. He says that not all auto drivers are the same, even though a lot of them may ask for extra money. The girl apologises to him.

At the gym, Vedanth warns the rowdies harassing Amulya that if he hits them, they will go into a coma. However, he also says that he does not feel like hitting anyone and continues to work out. The two men try to go and attack Vedanth when Amulya hits them. She tells them that they’re always striking at Vedanth or her from behind. She  challenges them to attack Vedanth or herself from the front.

Elsewhere, Aarthi and Vikranth have gone to visit the temple. Vikranth starts talking to the man outside the temple who advises him that he must carry his wife there for the bond between the two to remain strong. When they reach, Aarthi prays to God saying that she has always sought his blessings for everything. On this day of their marriage, she just wishes that the two remain together to support each other and enjoy their life.