When the room gets locked, Amulya worries about Vedanth and her spending time alone. He tells her not to worry. 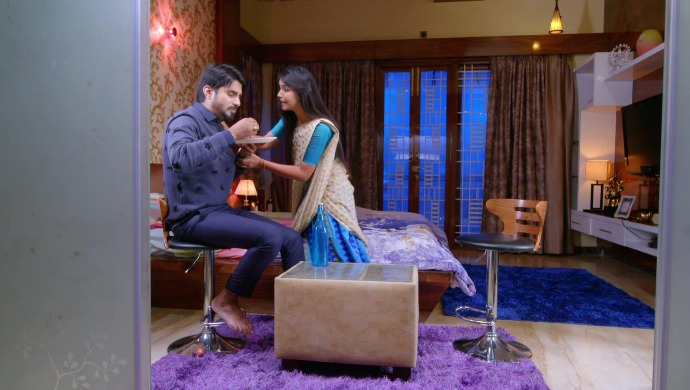 In the previous episode of Gattimela, Vedanth accidentally tells Adya and Sarthak that he cannot imagine the pranks that they all will play on the first night after his marriage. Everyone begins to smile in disbelief that Vedanth even had the thought of having a first night. At home, Pari accidentally calls everyone including Aarthi for dinner. When she realises that Aarthi is now married, she begins to tell Manju that someday their other three daughters will also get married off and they will eventually be lonely. They all share a sentimental moment.

In this episode, Amulya runs to the kitchen to get Vedanth water as he has eaten a lot of chillies. She gets vexed when she sees Vedanth suffering and asks him if he is still experiencing discomfort. When he says he is, Amulya runs down to get something sweet that will make the spice go away. She also begins to stare at him with a lot of affection. The two share a romantic moment when they get lost in each other’s eyes. Vedanth thinks of Amulya’s confession again which brings them back to reality. Amulya also realises that she had been staring at him and goes back to sit sway from him.

When Vedanth decides to go back to his room, he realises that the door has been locked which makes Amulya even more nervous than she already was. He also tries to call Vikranth to ask him to open the door but the latter does not pick up the call as Aarthi and he are celebrating their first night together. Vikranth, then, gifts Aarthi a nuptial chain for her to wear every day. He ties it around her neck and the two share a romantic moment.

Vedanth tells Amulya that the door cannot be opened from inside as there is something wrong with the lock. Amulya worries what people in the house will think if they realise that they have spent the night alone. He tells her not to worry as the house help will open the door before anyone wakes up. The two share an awkward moment.

Mugulu Nage, Gooli: 5 Films All Couples Can Watch To Make Their Stay At Home More Romantic