From The Golden Era Of 70s To Now: A Brief History Of The Birth & Rise Of Kannada Cinema

Take the journey of how the Kannada film industry has evolved since the 'Golden Era' in the 1970s-80s to winning 13 National Film Awards in 2019. 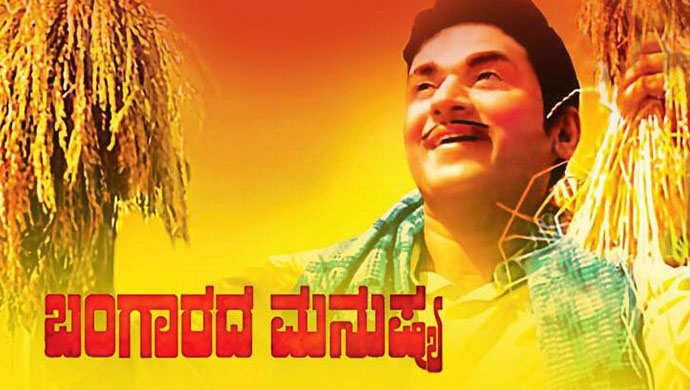 The Golden Era of Sandalwood is generally the time period of the 70s when the face of films completely changed. But before getting into the details, here is a brief history of the birth and rise of the Kannada Cinema. It was in the early 30s that Sandalwood, also known as Chandanavana, was technically born. Sati Sulochana and Bhakta Dhruva, the first two Kannada talkies (film with just a soundtrack, somewhat like a silent film) were released in theatres in the year 1934.

A prominent director Gubbi Veerana soon emerged in the forties and directed many theatre-plays. It wasn’t long before he started his own theatre company called the ‘Gubbi Veerana Company’. A decade later, the megastar of the millennium Dr Rajkumar came to light from the same drama company and the tables turned instantly, in favour of the film industry of course! What’s more? Dr Rajkumar’s debut in Bedara Kannappa (1954) alongside Narasimha Raju, whom we revere as the Hasya Chakravarthy of Karnataka, opened up scope for more mythological-historical films. The Central Govt too appreciated this attempt as the film ran successfully in theatres for 365 days.

A decade later, i.e, in the 60s, where the majority of the movies made were either mythological in nature or had a touch of history to it. Famous in this era were actors like Kalyan Kumar, Uday Kumar and Rajkumar. It was also a time when aspects of comedy, adventure and romance started gaining popularity. Finally, we begin with the 70s, also known as the ‘Golden Era’ of Sandalwood and we will take a look at the evolution of the industry since then.

Director Puttanna Kanagal can be regarded as the doyen of Sandalwood during this period because of his peculiar way of making films. You see, Mr Kanagal was always fascinated by independent filmmaking, so he would often choose subjects that were considered taboo, or were spoken less about. Because he didn’t care much for anything else but his vision, director Puttanna Kanagal could make gems like Naagarahavu (1972), Shubhamangala (1975) etc.

The Golden Era is also treasured for another reason. It’s because it was the time when two other stars shined brightly – Sahasa Simha Vishnuvardhan and the Rebel Star. They stepped into the Kannada film industry during this period and created an uproar in the masses with their one-of-a-kind films. Furthermore, parallel cinema, also known as alternate cinema, was brought into the industry thanks to the legend T S Nagabharana (Narasimha from Bramhagantu).

While more directors started gaining entry into the industry, the most contributions were made by Rajendra Singh Babu, V Somashekhar and H R Bhargava amongst others. This was also the time when Hamsalekha, the best music director and composer of the industry came into the picture. He collaborated on many occasions with the Crazy Star V Ravichandran to make melodious youth-centric songs. It was the period when actresses like Sudha Rani, Malashri, Vanitha Vasu and Tara came into limelight.

By the mid-nineties, the digital revolution had begun, so over time, such relevant and believable changes began to be executed onscreen. The biggest example of this change was the Real Star Upendra’s directorial debut Om, which had actually hired real gangsters from Bangalore to play the relevant roles. The next hit came in the form of his acting debut A, which was equally a hit in the audience.

For millennials, this would be your best era of Sandalwood because of the dashing young set of actors that came like a relief wave in the 2000s until date. Be it Puneeth Rajkumar’s acting debut in 2002 or Vihan Gowda’s debut in 2019, the popularity and fandom came back rushing in during the millennial era. With concepts such as mass-oriented films to high-octane action movies, the tremendous changes and acceptance that the fans have shown is nothing but joy and gratitude from the celebrities.

The last decade also saw the rise of actors like the Challenging Star Darshan, Kichcha Sudeep, the Rocking Star Yash, the Golden Star Ganesh and many more. Did you know that thanks to the 2006 film Mungaru Male starring Ganesh, was the first-ever Indian film to run for over a year in the multiplex theatres? Not only this, made from a budget of approximately 1.3 crores, the film made a whopping 80 crores in profit! Isn’t that just so amazing?

Other films that bombed at the box office during this era were Bhajarangi, Ramachari and Jackie. Due to the fact that the Kannada film industry was being exploited in terms of movie-ideas in the early part of this decade, the last 5-6 years have proven extremely fruitful to Sandalwood. The National Film Awards in 2019 was like a box of goodies for Sandalwood as it won a whopping 13 awards in total! Out of these, 11 were for feature films, I mean how amazing is that?

According to the 2018-19 reports, we were also the first film industry to complete a gross total of 243 films. Some of the awards included Best Kannada film for Nathicharami and the Golden Lotus Award for Best Children’s film. The Rishab Shetty directorial Sarkari Hi Pra Shaale, Kasagodu; Koduge: Ramanna Rao won the hearts of many and ended up getting the prestigious award. All this proves to show that the industry has got more vigorous and vigilant towards making films that people want to watch. Like they say ‘Abhimaanigalu Nammane Devaru‘ (Fans Are God)!

What do you like most about the Sandalwood industry? Let us know your thoughts in the space below.

Watch Doddmane Hudga if you are a fan of the Power Star and the Rebel Star, streaming here on the ZEE5 platform.

Watch The Recreation Of The Hit Yester-Year Film Nagarahavu, Streaming Here On Your ZEE5

Radha Kalyana EXCLUSIVE: 12 Pictures From A Future Episode That Shows Radha Is In Trouble