From Hariharan To The Lovely Star Prem: 10 Sandalwood Celebs Who Have April Birthdays

Ready to note down your favourite stars' birthdays this month? 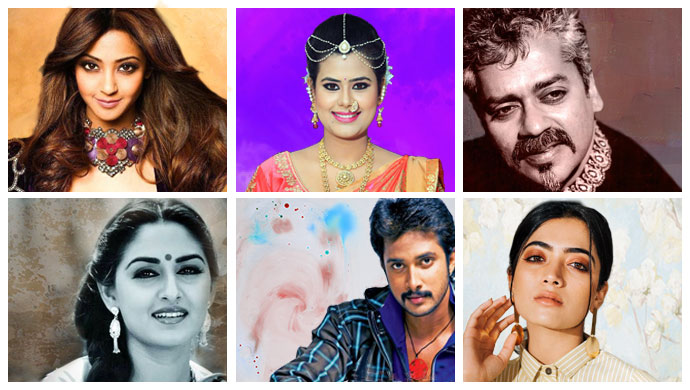 The Zee Kannada Kutumba has always been on top in wishing every important celebrity on their birthday. We all know that a birthday is the most special day in an individual’s life. Especially for fans, celebs’ birthdays are a big thing for them because it is their idol’s special day.

While we saw many birthdays in March like the ones of Jaggesh, Puneeth Rajkumar, Prakash Raj & Rakshita Prem, here’s the list of stars’ whose birthday falls in April. Get ready with a wish note for them.

Isn’t it cool that not one but two icons were born on this day? These two have been massive contributors to almost all the film industries in India including Bollywood. While the pioneer of Indian fusion music Hariharan will turn 64 on this day, the retro beauty that is Jaya Prada will be 57 years of age. Don’t forget to wish these two virtuosi!

After making the 2016 film Kirik Party a commercial success, the gorgeous Rashmika Mandanna is said to be one of the highest actresses in the Kannada film industry. Also known as ‘Karnataka’s Crush’, this young lass will be turning 23-years-old in a few days.

The Huliraya actress Chirashree Anchan shares her birthday with the extremely talented actress Nithya Menen. However, the newbie Chirashree will complete 23 years on her birthday while Nithya is all set to cross the 30-mark.

Coming to the Zee Kannada TV industry, it’s time for you to wish Maya from the show Yaare Nee Mohini, a very happy birthday on the 10th of this month! Aishwarya Baspure is an extremely talented actress, who will scare you onscreen with her endless schemes against Belli, but in real life, she is a darling who is loved by all!!

Say hello to Mrs Manchale, aka the ever-so-beautiful Aindrita Ray, who can melt anyone’s heart with that adorable smile of hers. Turning 34 this year, it is surely a special 2019 for the Melkote Manja actress because it is her first year as a married woman!

One of the veterans in Comedy and Drama is the prominent actor Rangayana Raghu, who will complete 54 years this month. He is an entertainer in all aspects. Especially his expressions and gimmicks onscreen, are to die for. Do you agree?

The cute Prem Kumar, also known as Lovely Star will turn 43 this year but doesn’t look a day older than 32 or 33 years old according to me. The calibre of this actor is high because of the versatility in his roles. Don’t forget to wish him on his birthday if you are a fan!

He is more than a legend for the citizens of Karnataka. He is close to God for all the fans and unfortunately met his untimely demise in 2006, just 12 days before his birthday. Nevertheless, this icon has made a big space in all our hearts, and his memories will live on with us forever. Say Happy Birthday to Namma Annavare Dr Rajkumar on 24th, to show how much he means to you!!

Let us know in the comments space below about whose birthday you are looking forward to the most.

Did you watch the full event of Hemmeya Kannadiga Awards 2019? Watch it here on ZEE5 now!

Paaru Actor Sharath Bharadhwaj Will Inspire Your Next Crafting Hobby