Films Like KGF: Chapter 1 & Natasaarvabhowma Are Proof That Sandalwood Is Upping Its Game

There is also a third box-office hit, Yajamana. Together, such films are revolutionising the Sandalwood industry. 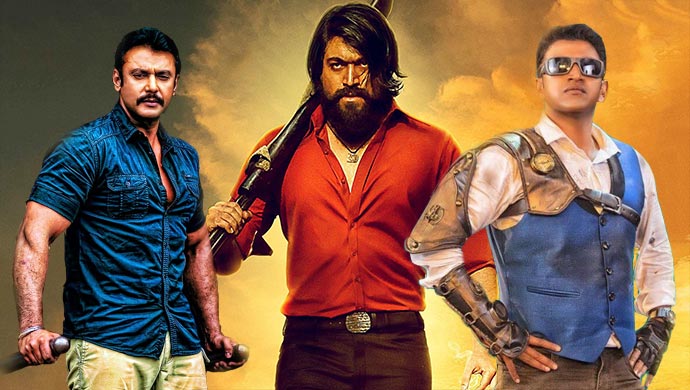 You must know by now that 2018 ended with a bang for Sandalwood. Rocking Star Yash starrer KGF: Chapter 1 made a massive profit at the box-office and marked the entry of a new phase in the Kannada film industry. With Ananth Nag, Vashishta M Simha and Achyuth Kumar added into the mix, the film held strong on all fronts. Additionally, due to the extensive and well-deserved hype, the film was dubbed in various languages and soon became a rage in the country. I have seen it in Kannada and Hindi, and believe you me, the sakkath intensity has been maintained in both languages, giving the film that much more value.

So much so, that this is the only film in the history of Sandalwood to have crossed the 100, 200 as well as 250 crore mark at the box-office! Want to know another fun fact? KGF: Chapter 1 is the third highest grossing Hindi dubbed film in Bollywood preceded by the Bahubali Franchise and 2.0.

After KGF, the next best film to talk about is Yajamana, starring Challenging Star Darshan. It surpassed its budget in the box office and became a superhit for fans. The unique ideology, the cast and the way directors V Harikrishna and Pon Kumaran have carefully crafted the film to keep all kinds of audiences interested prove that the progress of the industry has picked up a good speed.

Another splendid film, Natasaarvabhowma, helped with new ideologies of direction and cinematography for the Kannada film industry. Unlike before, when simpler concepts were used in films, nowadays makers are extensively looking up trending concepts and try to get the best, onscreen, for those two-three hours. In Natasaarvabhowma, Power Star Puneeth Rajkumar will be seen in a never-seen-before role, where his character will be dealing with some paranormal entities. To know more you will have to watch the film, which was released on 24th May on the ZEE5 platform!!

While, this is the first step to a better Kannada film industry, there are some undeniable obstacles still in the path. Hopefully, in the years to come and with more films like KGF: Chapter 1, Yajamana and Natasaarvabhowma, it will be a fab experience henceforth for viewers and fans alike.

Give a shout out to your favourite stars in the box below.

Watch the best Kannada blockbusters on the ZEE5 platform by clicking here.

Rashmika Mandanna Can Be Your New Source Of #MondayMotivation